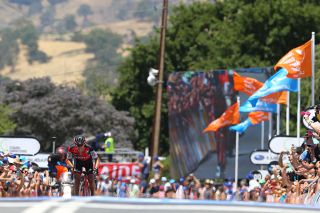 Richie Porte on his way to victory at Paracombe in 2017 (Image credit: Getty Images)

While stage 3 of the 2020 Tour Down Under, from Unley to Paracombe on Thursday, might not actually decide this year's race – that will come down to the final stage to Willunga Hill on Sunday – it will nevertheless establish a clear pecking order between the favourites, and will certainly see a number of riders fall out of contention.

The stage winners on the two previous occasions that the race has finished at Paracombe – Rohan Dennis in 2015 and Richie Porte in 2017 – both went on to win the race overall in the same year.

2020 may be no exception, although defending champion Daryl Impey (Mitchelton-Scott), who's won the past two editions of the race, will be doing everything he can to remain in contact to try to win the race for a third time.

A steady, neutralised six-kilometre climb away from the start in the Adelaide suburb gives way at the edge of the city to the start of the South Eastern Freeway, which takes the riders up a further seven kilometres to Crafers. It provides the perfect opportunity for some keen, and perhaps young and ambitious, riders to pounce and establish a breakaway on what is an undulating stage for the entirety of its 131 kilometres.

A somewhat complicated second half of the stage, which provides roadside fans with multiple opportunities to watch the riders go past, features four laps of an 11km circuit through Inglewood, Houghton and Paracombe, with the latter initially approached from the opposite way to the finish.

Upon completion of the circuits, the riders then descend back the way they came to Cudlee Creek and Gorge Road before turning right on to Torrens Hill Road that takes them up to the summit finish at Paracombe.

To call it a summit finish is perhaps a bit strong; it's a short, sharp, almost-two-kilometre-climb, with an average gradient of 9.3 per cent to the day’s only ‘king of the mountains’ point. With sections that reach 20 per cent, however, it should provoke the climbers at this year's race into action.

The climb then flattens out slightly for the final few hundred metres to the finish line but, in a race often decided by seconds, it's absolutely vital to stay in contact with the leaders here if you have designs on winning the overall classification.

The last time the race visited here, Richie Porte – then racing for BMC – put his rivals to the sword, winning the stage by 16 seconds from Movistar's Gorka Izagirre and Orica-Scott's Esteban Chaves. A dominant Porte went on to take victory at Willunga Hill and win the race overall by 48 seconds from Chaves.

"When Richie won on the climb in 2017, that was via the faster way onto it," Rohan Dennis (Team Ineos) told Cyclingnews after the finish of stage 2 in Stirling on Wednesday.

"It's a harder approach this time, which probably suits him even better, making him the guy to beat. If you win up on Paracombe, I think you'll be pretty hard to beat overall," the time trial world champion said.

Porte knows what he has to do, but appears wary of Impey's ability to cling on and limit his losses on such climbs, having finished second overall to him in the past two editions of the race.

"Daryl's obviously going well, and was second on the stage today [stage 2], and so he's in front a bit, but it's a different finish at Paracombe," Porte said, referring to the bonus seconds Impey's been able to pick up on the opening two stages so far, which already puts him nine seconds ahead of the likes of Porte and Dennis.

"The way Mitchelton are riding, they've got the team to do what they're doing. Daryl's obviously on stomping form, so it makes sense to back him. Daryl's the guy that's won this race twice, so he's probably the biggest threat," Porte said.

Porte's new Trek-Segafredo teammate Kenny Elissonde, who's joined for 2020 from Team Ineos, also has experience of Thursday's final climb, but experienced it very differently the last time in 2017, when he was riding for Team Sky.

"Sergio Henao was our leader that year, and he had a puncture, so I had to wait for him, and was then out of the fight and didn't get the chance to do the climb full gas,” the French climber said.

"It's a short, really explosive climb, and positioning is key. If you're outside of the top 20 going onto it, you're almost out of the fight straight away because it's really short and the hardest part comes right at the beginning.

"Hopefully we can set Richie up. He has the experience of having already won there, so I think he already knows how he wants the team to ride.

"If the climbers want to take time on Impey, they've got to try to go pretty early," Harper told Cyclingnews. "You've got to have a crack at Paracombe if you want to win the race.

"We've got George Bennett here, too, who I think will go really well up there, so hopefully we can take a bit of time out of the quicker guys who can pick up bonus seconds elsewhere, and leave it all to play for on the last stage."

If the climbers really take it on – and much will depend on how fast the stage is raced ahead of the final climb – then Paracombe could also prove to be Impey's undoing as the South African attempts to make it three overall wins in a row.

"The direction of the wind on Paracombe is also important," Impey's sports director at Mitchelton-Scott, Matt White, told Cyclingnews.

"We did the climb the other day in training and it was a block headwind," he said. "That would make it hard to get away. When Richie won it, we went up the gorge and BMC put the hammer down, and there were only 30 guys left. It was a tailwind, and so he went away.

"If a climber does win on Paracombe, it's going to be very hard to then dislodge them for the rest of the race. If they win by, say, five seconds and get a time bonus, where do you get 15 seconds back?" White added.

"There are a lot of guys here this year that are ready for it," said Cofidis' Nathan Haas, who took third place on stage 2 on Wednesday, and finished fifth at Paracombe last time, in 2017.

"But past performances don't necessarily give any indication of what might actually happen. You hit the climb, and it's just horrible."