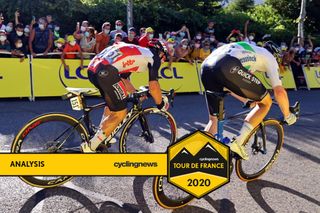 Sprint stages are few and far between in this year's Tour de France, but Caleb Ewan seemed to comprehensively confirm that he is the fastest man in this year's race with victory on stage 3 in Sisteron. He zig-zagged around his competitors before passing Sam Bennett (Deceuninck Quick-Step) in the final 50m, doing it without much lead-out support in the closing stages in what was a technical and chaotic sprint straight into a headwind.

The Australian now has four Tour stage wins, but it was his dominant speed in this sprint that will cement his standing as number one. Ewan said after the win that he wanted to prove that last year's results weren't a fluke, and this win certainly does that, if there was any doubt.

It was a messy sprint, and both Sunweb and NTT failed to take advantage of their numerical superiority going into the final kilometre. Perhaps, if you have as much speed as the Australian clearly does, a big lead-out train isn't a necessity. This is helpful considering that Lotto Soudal are already down to six men after the withdrawals of Philippe Gilbert and John Degenkolb. Ewan was left with Jasper De Buyst to guide him, who he managed to lose inside the messy last kilometre anyway.

Cyclingnews predicts: Our writers offer their views on this year's Tour de France

Today's win was like a work of art as he came from far back, dodged his competitors, and went close to the barriers before barreling up the middle past Bennett. Peter Sagan (Bora Hansgrohe) could have closed the door on him, but didn't, allowing Ewan to zip to the front, drifting past his competitors like they weren't there. It was like watching Messi on a mazy dribble, as once he got going it never seemed in doubt. Shorter than the Argentinian footballer, Ewan finished in a way that would have made Messi proud, slaloming past the other sprinters as if they were braking. It was the kind of route to the line that an ordinary cyclist couldn't manage at 20km/h, let alone more than triple that speed and under the pressure of a Tour de France bunch finish.

The result was as much about positioning, as well as Ewan's speed. Ewan gambled by sitting far back - he said after with 1km to go he dropped back to save his legs as much as possible - which was a risk in a sprint, but also crucial in a headwind. Anyone hitting the front too early (see Sagan) was probably going to run out of speed. Ewan wasn't even in the TV shot with 200m to go, he was that far back, but he seemed to explode out of nowhere, through the tiniest of gaps, around the barrier, then in front of Alexander Kristoff (UAE Team Emirates) and Sagan. Had he left it a second later to go, that gap by the barriers would have closed, and Bennett would have won.

Ewan has been tipped for Tour success since before his pro career had even really got started. He had to wait for his debut though, and when he was finally handed a long-awaited start last year it looked as if Ewan would be a nearly-man, with four top-threes in the opening week, but no victories. He finally stamped his authority on the race with a win on stage 11 in Toulouse and once the genie was out of the bottle, he couldn't be stopped. He won the final two sprint stages of the race, including the big one on the Champs-Elysees.

Ewan is often compared to Mark Cavendish because of his height and his positioning on the bike and the 26-year-old has the confidence and the power to live up to that comparison. At just 1.65metres, his diminutive stature also means that, like Cavendish, he should be less affected by a headwind, such as the one in Sisteron, which would have had slightly more impact on a sprinter with a bigger frame like Bennett.

That's not to deny that there isn't huge power in Ewan's small frame. There is something animalistic about his sprinting, the way he puts his head down and stomps on the pedals. Watching Ewan weave around his competitors, leaving Sagan looking like he'd stopped dead, it's tricky to argue against Ewan having the speed to trump the rest, something to look out for on the few sprint days left in this year's Tour.