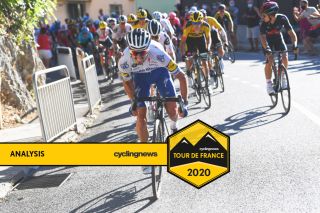 Three days into this 'lockdown Tour de France' and some things are clear while some things are even more confusing. After the fiasco of the first stage it was apparent that very few teams were as organised as Primož Roglič's Jumbo-Visma squad.

They were the only team that actually managed to keep some resemblance of togetherness, avoiding being scattered by the wind and rain. That it was as slippery as you'll ever get for race conditions was an excuse for the others, but even so, Ineos Grenadiers could count themselves lucky that nothing major happened to Egan Bernal.

Great French hope Thibaut Pinot was unfortunate to crash just inside the 3km mark and thus not lose any time after he had avoided trouble all day. The fact all he lost was some skin and a few bruises too is harsh but it could have been a lot, lot worse.

Just look what state Pavel Sivakov ended up in – as someone who was expected to play a major supporting role in the mountains for the defending champion he's found himself in survival mode, as has Andrey Amador. Having two riders hobbled isn't an ideal start to the Tour, so it's just as well Luke Rowe and Michał Kwiatkowski are making up for the injuries that Ineos have sustained.

They haven't been their usual dominant selves in the lead-up to the Tour, though, and that poses the question over who is going to take the race to Jumbo-Visma after the Dutch squad look ready to impose themselves at will. Not in the crushing way that Sky/Ineos have done in the past, but in a more subtle style, taking over when they need to keep their leaders safe and – as witnessed on the opening day – deciding with the agreement of the other GC teams that it was a good idea to slow the race so everyone could get back after the multiple crashes and incidents.

Common sense seemed to have gone out the window until then, certainly for Astana, who were desperate enough to attack on a downhill. The inevitable crash for their leader Miguel Ángel López, 'Superman' nickname or not, head-butting a road sign was karma for the stupidity of their own making. All privileges are now used up amongst their fellow professionals.

The totally different circumstances of the following day showed that this Tour is going to be conducted more as a series of one-day races rather than a controlled and dictated procession. Of course, the route is favourable to that and there was the feeling beforehand it was designed for Julian Alaphilippe after his extraordinary ride last year.

Coming into the race, the Frenchman has been denying any interest in repeating those feats, and up until his victory on the Promenade des Anglais at the end of a proper sort out on stage 2 some people believed that. Now no-one knows what to think. Is he here for GC? Is he here for stages?

Alaphilippe insists it's still the latter and an emotional win showed he was living only for that moment but things change once you're in yellow, and he has a sense of responsibility and understanding of what it means to be a Frenchman leading the Tour de France.

Deceuninck-Quickstep don't have the team to control the race in the same way they didn't last year, either. In fact they're more set-up for sprints with Sam Bennett, but Alaphilippe exists on feedback from the public, the attention building his confidence and pushing him to a higher level. He'll try to keep his yellow jersey for as long as possible.

Stage 4 to Orcières-Merlette will be a test that he ought to pass; then he'll be looking at keeping the lead until the second weekend at least. If that happens then there's no knowing if or when he'll crack. Last year he wasted too much energy whilst leading but they have that experience at Deceuninck-QuickStep, and he has matured enough as a rider to keep his enthusiasm under better control, his stage win allowing him to relax enough to see the race with clarity. Not totally relaxed though – so we can expect an exuberant race leader rather than a defensive one.

For the GC favourites, Roglič and Bernal, it suits them perfectly to let Alaphilippe carry the main part of the pressure and responsibility of the race. At Jumbo-Visma so far they've shown themselves able to put their top riders in the best positions when they have to, and they don't show any signs of weakness.

After the Col d'Èze on stage 2, they too were reduced to just Roglič and Dumoulin in the front group but that's normal – the level at the Tour is higher than the Dauphiné, and it was mostly leaders and climbers left.

Over at Ineos, things are a bit trickier. Bernal has survived without major incident and any hint of a bad back seems absent. However, it's not the domination we've seen previous years. Instead it's far from it, so how team boss Dave Brailsford deals with that remains to be seen.

If the chance to take time on Roglič and Dumoulin presents itself then they'll take it, but I don't see them pushing to take the race lead straight away. They don't have the resources at present to dictate or control the race through the Massif Central, so the sensible option is to wait. However there's a lot of posturing and pride in the cycling world at the top level.

Letting Alaphilippe have his day will be OK for a while, but like last year it'll begin to grate. The problem is that Jumbo-Visma aren't going to be surprised by anything Ineos do, and Deceuninck-QuickStep won't be afraid of any sidewind attacks before the medium mountains. It could be a frustrating middle week for the defending champions.

Whilst all the humming and hawing is going on between the two big teams, Pinot has to stay attentive and not fall asleep at any crucial moments. He's not been great on the opening days before, but if these are his worst days and the injury niggles he has clear up then he's in a great position – the one where he follows, does very little, and then takes his chance when he can. It's similar for Tom Dumoulin, but Pinot is a better climber than the Dutchman, so at this stage he's OK despite having David Gaudu on the wounded list.

Someone who looks really intriguing is Mitchelton-Scott leader Adam Yates. For a moment it looked like he was going to be race leader and he would have been if Alaphilippe hadn't won the stage.

Yates clearly has the legs to be part of the GC fight so why isn't he more ambitious? He blasted across a significant gap to Alaphilippe and Hirschi without too much difficulty, then he rode with them as if he was a GC contender looking to take time.

The Briton is still saying he's here for stages wins but he won't win many leading out into a headwind with two better finishers on his wheel, so therefore you can only deduce that he is thinking of a top place in Paris. This might be his last opportunity – at Ineos he's not going to be their first option for many stage races with the pool of talent they have to chose from.