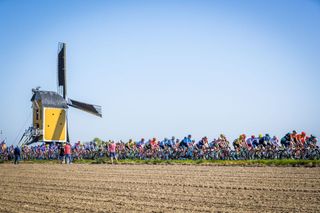 A relatively new top-level one-day race, Amstel Gold Race was due to hold its 55th edition on Sunday. The race has been postponed, however, due to the COVID-19 coronavirus pandemic, and is unlikely to be rescheduled at a later date this year.

There will be a virtual race, though, following on from a similar event run for the Tour of Flanders.

Prior to this season, the race had run uninterrupted since 1966, with beer company Amstel serving as the title sponsor since the beginning.

Originally, the race was to start in Amsterdam, through which the Amstel River runs, though complications with route planning put paid to that. Alternate starts in Utrecht and Rotterdam couldn't be realised either, and so the race moved to the south of the Netherlands.

The race finish moved to Maastricht in 1991, with the start moving there seven years later, as the race followed a sinuous route through the hills of Limburg. The finale moved to Valkenburg and the climb of the Cauberg in 2003, with the finish line shifted 1.8km beyond the summit a decade later.

The route underwent a further alteration in 2017 and the Bemelerberg is now the final ascent, a little over 7km from the finish in Berg en Terblijt, just outside Valkenburg.

Here, Cyclingnews looks back at the previous 54 editions of the race,  teasing out the statistics, stories, facts and figures of Amstel Gold Race.

Dutchman Jan Raas dominated the race in the late 1970s, taking five victories, four of which came with the famous TI-Raleigh squad. A strong sprinter with enough quality to excel on shorter climbs, Raas once said that Amstel Gold Race was made for him.

He won solo in 1978 and 1979, and twice won in a sprint, while his final win in 1982 came from a late attack. Philippe Gilbert has four wins between 2010 and 2017, and the Belgian blasting up the Cauberg has been a familiar sight in April in recent years. For good measure, he also won the 2012 World Championships thanks to a devastating acceleration on the climb.

Medal table: the most podium finishes

Raas once again tops the table here, with his five wins coming alongside two podium places. At his first participation, Raas finished second, 4:29 behind Freddy Maertens, while at his last outing he was third behind solo winner Phil Anderson.

Gilbert usually wins when he's in the mix – he has no second of third places – but has finished fourth, fifth and sixth.

Michael Boogerd, meanwhile, came close to adding to his two-win tally on numerous occasions, finishing runner-up to Erik Zabel, Alexandre Vinokourov and Davide Rebellin during his career. He also finished third on two occasions and fourth on one occasion.

Davide Rebellin, still riding at Continental level with Meridiana Kamen this year at the age of 48, holds the record for the most participations with 16 between 1993 and 2016. He won the race in 2004 and was second in a Gerolsteiner one-two in 2007.

Philippe Gilbert, 37, is the next most-experienced active rider, with 14 Amstels under his belt. He's under contract with Lotto Soudal for two more seasons, so could match Rebellin in 2022.

Óscar Freire had plenty of top 10 finishes at the race, though only came truly close to victory on one occasion – his final participation in 2012. There, a late attack almost came off, only to be caught by a small group led by Enrico Gasparotto within sight of the line. Freire ended up fourth.

Valverde has six top 10s, too, plus three podium places. He lost out in a sprint finish to then-world champion Michał Kwiatkowski in 2015. Kuiper, meanwhile, got on the podium once, in 1977.

Zoetemelk is by far the oldest winner of the race, beating his next best competitor – Philippe Gilbert – by almost six years. The Dutchman, whose pro career ran from 1970 to 1987, also holds the record for being the oldest winner of Tirreno-Adriatico (38 years, 101 days) and the World Championships road race (38 years, 273 days).

After three podium places during his career, Zoetemelk finally triumphed in his final year as a pro, soloing to victory 30 seconds ahead of compatriot Steven Rooks.

The youngest riders to win the race come clustered at the 23-year mark, with no prodigies standing out from the crowd. Mathieu van der Poel, winner in 2019, is seventh on the list – he was 24 when he took his amazing last-gasp victory.

The mid-1990s saw a couple of speedy editions too, rather unsurprisingly. Solo wins by Stefano Zanini and Bjarne Riis round out our podium.

Recent years have seen the race hover around the 39kph mark, though last year's edition saw an average speed of 41.056kph, the fastest since 2003.

A solo win by Eddy Merckx provided the slowest edition of the race so far. The Belgian triumphed by 3:13 in a race where only 28 finished from a field of 165. That 1973 edition was hit by driving rain and freezing conditions. By the time Merckx made it to the finish, after over six and a half hours of racing, it was dark and sleet and snow was falling.

Looking at the data trends, we can see that the race has steadily grown in distance over the years, growing from between 230 and 240km in the 1970s to 260km+ in the past several years. It is harder to draw any real conclusion from the average speed given the changes to the course over the years, though it has ticked up in recent editions.

Nowadays, anything over 10 riders would be seen as a large group at the finish, given the sapping nature of the hill-filled course. In fact, we've only seen a lead group that large three times since the turn of the millennium, with Michał Kwiatkowski, Erik Zabel and Danilo Di Luca all winning from groups of ten or more riders.

In general, large groups at the finish are rare, with only nine occasions we've seen 10 or more riders duke it out in the race's history.

There are a few outliers though, including Bernard Hinault's triumph from a 60-man group back in 1981, his only win at the race in two participations.

Finally, we come to the largest winning margins, a category dominated by the 1970s. Freddy Maertens' 1976 win takes the prize, with a massive 4:29 margin of victory ahead of Jan Raas. It's no surprise to see Eddy Merckx up there either – his big win came at the brutal edition described in our 'slowest edition' section.

Philippe Gilbert's 2014 win was the last time we've seen a rider cross the line solo. He won by four seconds ahead of Jelle Vanendert. A year earlier, Roman Kreuziger soloed to the win 22 seconds up on Alejandro Valverde. The Czech rider attacked 17km out, riding the final 7km on his own.