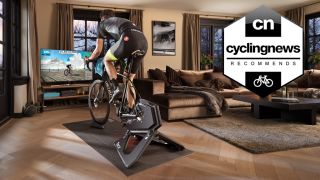 Tacx has been around since 1957 having started out as a bike shop in the Netherlands. In 1964 it began manufacturing exhausts for mopeds before turning its focus to rollers, trainers and car racks.

Recently acquired by Garmin, Tacx now makes turbo trainers, bottles, cages and software. The Dutch brand’s entire catalogue of smart trainers facilitates both ANT+ and Bluetooth connections and plays nicely not only with its own training software but also with third-party apps such as Zwift, TrainerRoad and The Sufferfest.

For 2020, riders from both mens' and womens' WorldTour teams including EF Pro Cycling, Jumbo Visma, Lotto Soudal, Boels-Dolmans and Canyon-SRAM will be using Tacx trainers for workouts and warmups.

The grandaddy of smart trainers

Tacx’s flagship Y-wing space fighter is now in its second iteration, with redesigned internals to be quieter, stronger and more precise than the original. Claimed to be accurate to a maximum deviation of +/- 1 per cent, the trainer can generate up to 2200w of resistance and simulate up to a 25 per cent gradient. With stronger magnets in the motor, it has more torque which minimises the slipping feeling elicited by significant efforts. The new magnet layout limits the amount of vibration that is transmitted into the floor. Like the original, the motor can also vibrate to simulate riding over cobblestones, or gravel too.

The Neo 2T utilises the cassette to drive the motor, allowing it to generate its own electricity, meaning it doesn't require mains power to run. If you do plug it in, the trainer can simulate gravity as you descend in Zwift.

Axle compatibility has also been improved, and now the trainer comes with adaptors for every axle standard except for SuperBoost.

Now in its second generation, the Flux 2 Smart trainer uses a heavier 7.6kg flywheel and stronger magnets to generate up to 2000 watts within a claimed accuracy deviation of only two per cent. It can also simulate grades of 16 per cent.

It’s not foldable and requires an outlet but the wide legs create an extremely stable platform. It won’t simulate rough road surfaces and comes with adaptors for every axle standard bar SuperBoost. Previous versions of the Flux have suffered from quality control issues with the internal belt and early models of the Flux 2 had major power accuracy issues.

It can also be used as a dumb trainer, the electronics follow a progressive power curve, so it will get harder the faster you go, just like riding outside.

When the Flux 2 was launched, Tacx essentially took the original, tacked on an S and lowered the price. That said, it also underwent a slew of internal changes for better road feel and accuracy, especially during big efforts. The trainer still simulates up to 1500 watts and grades of up to 10 per cent.

Tacx also subtly changed the design of the legs to eliminate compatibility issues with long-cage derailleurs.

Ideal for those who don't have a dedicated suffer cave

Direct-drive smart trainers are expensive but you can still chase your virtual mates around Zwift Island and not spend an arm and a section of your leg. Using a roller to create resistance, Tacx has arguably the best system for loading your bike and tensioning the resistance unit. Once it has been set, you simply flip a switch. The roller itself is made from a steel exterior to prevent wear, with an ‘elastogel’ core which does well to absorb vibrations going into the floor — not so much when it comes to reducing noise.

While the flywheel only weighs 1.6kg, the Vortex Smart has a surprisingly good feel and swiftly responds to changes in resistance — it can simulate up to 950 watts and a seven per cent incline. The fold-out legs make it super compact for storage.

One of the cheapest interactive trainers you can buy

The Flow Smart trainer also uses a 1.6kg flywheel; however, the electric brake has a tad less power, only outputting 800-watts of resistance within a claimed accuracy deviation of +/-  five per cent. Despite the lower price point, the Flow Smart can still mimic grades of up to six per cent.

Like the Vortex, it has an elastogel roller, folding legs and a wide stance to prevent you from tipping over during high-intensity efforts.

Wallet-friendly way to get into to smart training

Cheaper than a powermeter
ANT+ and Bluetooth
Resistance control is manual

The Satori Smart toes the line of what you can call a 'smart trainer.' It will measure your speed, cadence and power but the resistance can only be adjusted via a remote which attaches to your bars.

It will communicate with training apps but it's a one-way conversation with the trainer only transmitting your power, speed and cadence but not receiving any information. If you don’t have a power meter but want to take advantage of something like TrainerRoad or The Sufferfest this is the most wallet-friendly way to get started.

All you have to do is pedal, hard

The latest craze in Smart Trainers is the training bike. The idea here is that there is no faffing with attaching your bike to the trainer, getting fans set up, or pairing sensors — all you have to do is jump on and pedal.

For its bike, Tacx has taken its Neo trainer and built a bike on top. At the front, there are dual fans, virtual shifting and a built-in display that shows your speed, heart rate, power and which gear you’re spinning.

The bike abides by industry standards for bars and saddles, meaning you can sub in your components of choice, and all the fit adjustments can either be made with included levers or a hex wrench.