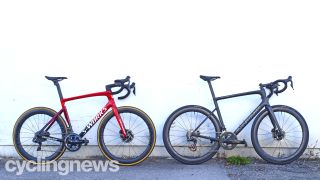 In fact, I personally own the Tarmac SL6. Having been provided a Tarmac Expert as a race bike in 2018, I then bought a disc-equipped S-Works Tarmac Dura-Ace Di2 at the start of 2019. It's a bike I've ridden and raced for 18 months and it's been faultless throughout. Over that time, I've made some amendments to the spec but, by and large, the bike remains factory spec.

However last week, Specialized said farewell to its stalwart and announced the Tarmac SL7. Like many Tarmac owners I know, the pangs of new-bike-desire are beginning to show themselves but, having ridden both Tarmac new and old, is the shiny and new Tarmac SL7 actually better or is it just shiny and new?

We covered the launch of the new Specialized Tarmac extensively, and we've shared our opinions of the new bike in our Specialized S-Works Tarmac SL7 review, but now we're going to pit old vs new in a comparison piece to not only showcase what's different, but also how that translates to real-world riding, and equally importantly, ownership.

Aesthetically, there's not a vast difference between the two bikes, but the SL7 sees a sprinkling of the Venge's aero lines throughout, which will undoubtedly come as Specialized looked to increase the bike's aerodynamic properties.

Ignoring the obvious colour differences, the aesthetic of the Tarmac SL7 cockpit is undoubtedly more refined. The lack of cables at the cockpit is not only more aerodynamic but it's also a darn-sight cleaner.

The rest is much of a muchness really, and the aesthetic preference will differ from person to person. For me, the finer details such as fork shape, seat stay junctions and the rear dropouts are better on the Tarmac SL7.

Both bikes come with Roval wheels from the factory. The SL6 was specced with Roval CLX50, a very well-reviewed pair of carbon wheels that is included in our guide to the best road bike wheels. The newer model is fitted with the more recently launched Roval Rapide CLX wheels.

Performance-wise, when using the same setup of latex inner tubes with Turbo Cotton tyres, the Rapide CLX wheels do feel smoother and more stable. The rim profile helps the tyre inflate to a perfect roundness which makes for great cornering confidence, and the stable front wheel inspires boundary-pushing to the max. Overall, the difference is slight, but it favours the newer wheels.

Aesthetically, this 35mm rim just looks strange, as there is a pronounced step up from the width of the tyre to the width of the rim itself. I've put approximately 1,000km of tarmac underneath the Rapide CLX wheels since their launch, with tyres ranging from 24 to 28c, and I'm only just beginning to come round to the change.

However, the new wheelset is not tubeless compatible and that's a big downfall considering the ascendency of tubeless road tyres. While I'm personally not sold on road tubeless (I just don't puncture all that often with tubes) if you're spending circa $2,000 on a set of wheels, it'd be nice to have the choice.

SL6 wins this one.

My personal Tarmac SL6 tips the scales at 140g lighter than the new model, and that's even with a few weightier additions. The CeramicSpeed OSPW is said to be around 30g heavier than stock, the 28c Turbo RapidAir tyres are around 45g heavier than 26c Turbo Cottons, and my SL6 is fitted with Shimano 105 pedals, as opposed to the Ultegra I have fitted to the SL7. If we were comparing apples to apples, the difference would be greater still.

Of course, whether or not this actually matters is worth considering. I live in an area where the hills are steep, but short, so the majority of my riding will be done on flatter terrain. Therefore, the claimed aero improvements of the SL7 are likely to be more important - but, in a pure numbers game, the SL6 wins this one.

At the front, the cables on the SL6 are undoubtedly easier to access, and therefore easier to service. However, for me, the aesthetics of an integrated cockpit is markedly better.

Having swapped the brakes over from Euro to UK style, I can confidently say that running hoses through the Aerofly II handlebars isn't actually all that difficult. The only difficulty is running cables through the head tube into the frame, rather than through entry in the down tube.

Switching to a threaded bottom bracket is undoubtedly the right thing for Specialized to have done with the SL7. Not only is the threaded system less prone to creaking, but it is also easier to remove and service than a press-fit system. However, the downfall on this front is that it means the venerable Specialized carbon chainset has been ditched as the wide spindle isn't compatible with the threaded system. Therefore, the Dura-Ace Di2 model shown here is now specced with Specialized's power-meter integration (using 4iiii internals) to the Dura-Ace R9100 chainset.

Even so, the threaded bottom bracket earns the SL7 another point.

One of the bigger updates to the SL7 was the increased depth and refinements to the shape of the seatpost. Taking heed from the Venge, the Di2 junction box has been integrated into the top section, which adds an odd shape to the top section. It's not as ugly as the old CG-R seatpost, but the old S-Works post does look better. The seatpost I have fitted on the SL6 is actually the Pave seatpost, because of the preferred 0mm setback, but aesthetically, there's no difference.

The aerodynamic improvements and the integration of the Di2 junction box give the SL7 the edge on this one though.

Aesthetics will be the deciding factor here because we don't have any scientific testing facilities to cross-check Specialized's claims.

The seat tubes differ in that the seat tube on the SL7 is now around 10mm further away from the rear wheel. This affects tyre clearance somewhat, but the comfort element is supposedly the more relevant factor. In a seat-of-your-pants test, the ride of the SL7 is more abrasive than the SL6, but the seat tube is only a fraction of this equation.

Therefore, the increased gap, in my opinion, is a negative addition and I prefer the aesthetic of the SL6.

A simple test to round out this comparison. Which bike can fit the widest tyres. I've tested up to 32c tyres - because that's actually all I have in the garage at the moment. True to Specialized's claims, the Tarmac SL7 has increased clearances to around 4mm either side with 32c tyre fitted. The SL6 can fit a 32c tyre, but that free-space drops to less than 2mm and would undoubtedly risk paint rub in a real-world application.

As per the marketing spiel from Specialized, I see the Tarmac SL7 as a thoroughbred race bike. It's fast, it's light, it's aero. It's a great bike.

However, I personally feel it has lost some of that Tarmac 'character' that many owners love to tell you about yet have a hard time explaining. I expect that after a few more months of dialling in my position and extra saddle time on the SL7, the personality that I come to expect from a Tarmac will change and, in three years time, I'll probably be writing the same thing about the SL8.

But for now, there's still a lot to be said for the outgoing Tarmac SL6, and I'm going to keep hold of mine for a little while longer.