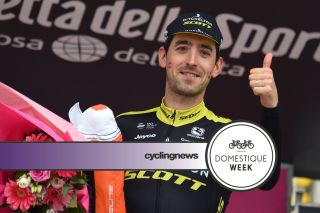 At 35 years of age and after spending time on WorldTour teams from Spain, the UK and now Australia, you’d imagine that professional cycling holds few surprises for Mikel Nieve, recently voted the sport’s best domestique by Cyclingnews readers. But a couple of years back, the Mitchelton-Scott pro admits he hit on a dilemma that had him baffled for a good while.

“For at least a season, a season and a half maybe after I joined Mitchelton-Scott, I couldn’t tell Adam and Simon Yates apart,” Nieve admits to Cyclingnews from his family home  in northern Navarre.

“I kept on mistaking one for the other. I get it right now, but it took me a good while.”

For Nieve, no matter which Yates brother and which leader he works for, from Chris Froome and Mikel Landa at Team Sky to Simon and Adam Yates brothers, and Esteban Chaves at Mitchelton-Scott, his role has pretty much been the same: guide the big names through the mountains as best he could. Then when the virtual drumroll comes to an end and the leaders spring into action, get through to the finish himself with as little fanfare as possible.

For Nieve, regardless of what the leaders have done, it’s a case of wash, rinse and repeat – and so on, and so on, for what has now become a total of 18 Grand Tours.

“It doesn’t bother me. For me what matters is the leaders remembering to shake your hand at the finish and say thank you afterwards," Nieve says.

"If they are grateful, like anyone would be, for what you’ve done and ensure there’s a good atmosphere in the team, that’s all I ask of them, nothing more special than that.”

For Nieve, who turned pro in 2008 for the small Orbea-Oreka SDA squad, taking the decision to work as a domestique was not something that happened overnight. Rather as it slowly sank in that he could not compete with the best of the best at their own level, he opted to recalibrate his goals towards working for them instead.

“It happened with time. When you turn pro you have to find your own place in the sport, and normally it takes a while to work that out, at least a few years. But I’ve no regrets about the choice I made,” he says.

“Okay, I won a stage or two in a Grand Tour. But the big objectives in the teams are the Monuments and the Grand Tour GCs, or podiums at least, and I don’t have the talent to do that. My time trialling isn’t good enough and I can’t beat the top guys on the climbs. But as my strong point is in the mountains, that’s where I’ve ended up being a specialist.”

The job requirements for being a domestique, Nieve says, are relatively simple to say, though not so easy to do well.

“You do need to be willing to give up your own chances, and to be able to find out what you can do best when it comes to working for others,” he explains.

Nieve did not, he says, learn from other domestiques in particular.

“More from myself, just a little how the veterans look after themselves and get the best out of themselves. If there was a team, though, where I learned the most about l how to look after a leader, that was Team Sky.”

“There were a lot of different leaders in that era in Sky,” he says.

Nieve was there for all of them. Bradley Wiggins, Geraint Thomas, Chris Froome and Mikel Landa were the best known, but others, like Richie Porte, Michal Kwiatkowski or Sergio Henao would sometimes step up to the grid. Nieve was always present and ready to do the hard miles when needed in the mountains.

Nieve has taken less than half a dozen wins during his career but they are all high-calibre: three Giro d'Italia stages, one in the Vuelta a Espana and one in the Criterium  du Dauphiné.

He agrees that being given his own occasional chance to shine made the behind-the-scenes work easier to accept.

“Yes, it matters. Victories on a personal level do make you happy and give you added confidence, because you know that you’ll get your chance when the leaders aren’t on song. Everybody likes a win,” he says.

“But when a leader wins and he gets that overall victory, that’s very special too. My first in a Grand Tour was the 2016 Tour de France, and going onto the Champs Elysées with that yellow jersey in your team, getting all the congratulations from the rest of the peloton for the work you’ve done, is something you never forget.”

But no victory is too small in a team and success is always shared.

“When the whole team’s worked hard, it’s something you all share,” Nieve points out.

He doesn’t, though, give himself any particular reward for getting the team leader home in the lead.

“It’s enough knowing what you’ve done,” he says. “Any Grand Tour is very hard to win, it might seem easy on TV, but when you’re living it on the inside, you known you’re going to suffer a lot. Everybody has bad days.”

Under contract with Mitchelton-Scott unti the end of 2021, but with no retirement date yet on the calendar, Nieve doesn’t have any particular personal objectives left in what remains of his career.

“Just to be at my best level possible and help the team to fulfil their own objectives. Rather than a particular objective, I just want to be satisfied with how I work. Personal wins may happen, they may not, but if you do everything the best you can, that’s the key to it all.”

As for the Cyclingnews award, Nieve is touched, but modest to a fault, he insists that he’s not the one who should have won.

Nieve emerged through the opening rounds of our week-long Twitter poll and then beat Michael Mørkøv (Deceuninck-QuickStep) in the final vote on Friday and Saturday. The 35-year-old Basque climber received 55.8 per cent of the vote in the final run-off.

“It’s very nice when something like that happens, and your work is valued,” he says.

“But I’m surprised, too, I don’t think I’m the best, there are plenty of others who do their job, don’t get on TV but who are very good, better than me.”

Asked as to who his own top domestique would have been if he had voted, Nieve says: “There’a very long list. There are always two or three guys in every team who really do a heck of a lot of work. So I wouldn’t be able to give you a name.

Despite those protestations, there are clearly plenty of people out there who feel certain Nieve is the domestique who deserves that honour the most.