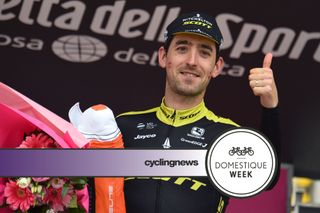 Mikel Nieve (Mitchelton-Scott) has been voted the Cyclingnews Best Domestique in the World as part of our 'Domestique Week' of special content and features.

Nieve emerged through the opening rounds of our week-long Twitter poll and then beat Michael Mørkøv (Deceuninck-QuickStep) in the final vote on Friday and Saturday.

The 35-year-old Basque climber received 55.8 per cent of the vote in the final run-off.

The two riders came though the opening rounds and then won their respective semi-final polls to secure a place in the final. Nieve was voted the Cyclingnews Best Domestique in the World ahead of Mørkøv, Tony Martin (Jumbo-Visma), Daniel Oss (Bora-Hansgrohe), Tim Declercq (Deceuninck-QuickStep), Andrey Amador (Team Ineos) Adam Hansen (Lotto Soudal), and Stefan Kung (Groupama-FDJ).

In praise of the domestique

As well as asking our readers, we also asked WorldTour professionals who they think is the best domestique in the world, and the results of that vote will be revealed on Sunday.

It is easy to think domestiques make a difference in sprints, the cobbled classics or chasing after breakaways, but they also play a vital role in the high mountains at Grand Tours, when having support for a team leader can be decisive.

Nieve rarely makes the headlines but is a highly valued member of Mitchelton-Scott after joining the Australian WorldTour team from Team Sky/Ineos, where he helped Chris Froome to victory at the Tour de France in 2016 and 2017, along with the 2017 Vuelta a España.

While, Ineos like to have a train of mountain domestiques on decisive climbs to ride tempo for their leaders, Nieve, known as 'Frosty', offers a more personal service. At Mitchelton-Scott, where he has been since 2018, he can always be trusted to be alongside Adam or Simon Yates in the key moments of the decisive mountain stages, ready to pace them, lead the chase of any attacks, or just hand over a bidon and give some final motivation.

He never panics and even stepped up to win a mountain stage of the 2018 Giro d'Italia after Simon Yates cracked and lost the maglia rosa. Last year, he rode both the Giro d'Italia and the Vuelta a España, finishing 10th overall in his home Grand Tour.

He has only won five races during his 13-year career but they include three stages at the Giro d'Italia, one in the Vuelta a España, and one at the Critérium du Dauphiné. Nieve has ridden 18 Grand Tours and was given a new two-year contract with Mitchelton-Scott last autumn.

"He has a wealth of experience. He has been there before and because we've got a young group, it's great to have a guy with so much experience," directeur sportif Matt White said when Nieve's new contract was confirmed during the winter.

"He leads by example, he's a very, very solid guy."

When Nieve's move to Mitchelton-Scott was announced, Froome said: "Words can't describe how much I'll miss Frosty next year."