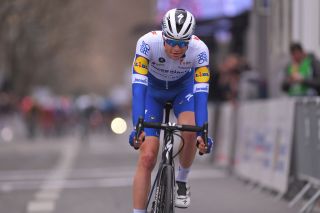 Ian Garrison signed for Deceuninck-Quick-Step at the start of the 2020 season (Image credit: Getty Images)

Georgia-born Ian Garrison rode to international prominence in 2019, with a string of performances that caught the eye, most notably the silver medal in the World Championships U-23 time trial in Harrogate. Prior to that, he'd honed his reputation, Stateside at least, with three seasons on the Hagens Berman Axeon team and victories in several races, including the US national time trial championships.

During 2019 he drew the interest of several WorldTour teams, but ultimately signed for two years with Deceuninck-Quick-Step, and has already made his mark as a driving force in a four-man stage-winning breakaway in last month's Tour de la Provence.

Cyclingnews: How did you first get into cycling?

Ian Garrison: I got into it through my parents. They were never racers but they rode for fun and always watched the Tour de France. So just through some friends, I started racing in cyclocross and on the velodrome. I was about 14 then, but had done lots of cycle touring and spent time on a tandem, mainly around Georgia.

CN: Who are your cycling heroes and are you a big fan of the history of the sport?

IG: I have to say that Lance (Armstrong) was definitely a hero, before all the drugs stuff happened. My dad had cancer as well, so that was a big part of it. And then I always liked Bradley Wiggins and Chris Froome.

CN: Do you have any favourite memories from watching those riders?

IG: One of my favourite stages was when Froome won on Mont Ventoux in 2013, that was really cool. Now I'm learning more about the history. I always followed the contemporary stuff, the current stuff and what was happening with the technology, but I'm getting into the old stuff more and more. There are some good stories.

CN: How did the deal with Deceuninck-Quick-Step come about?

IG: I was with Axeon for three years and then, through some contacts with them and Specialized, and after some good results in TTs and in U-23 races, I was able to make the step up. But Deceuninck-Quick-Step was very interested so that was where I decided to go. It's been a great environment so far and I feel very welcome here. I got to room with Zdenek Stybar and learned a lot from him and from Bob Jungels as well.

CN: What would you say are your specific talents as a rider?

IG: I don't know yet — I'm finding out! I just like racing and I want to get better. We'll see, but I don't want to put myself in a box. But I'm never going to be a pure climber and I'm pretty good at time trials, so that's where I'm best, I guess.

CN: You made a big impression in your first stage race with the team, when you got third from the break in the final stage of the Tour de la Provence...

IG: I felt almost disappointed. I had better legs than where I was positioned, but my sprint was a bit off. I was watching the others in the final kilometre and was planning to launch my sprint, but I went on the right side and hesitated a bit. Overall, I was really happy, as it was my first race of the year, just to get in the break.

CN: So a performance like that, so early in you time on the team, must give you a lot of confidence?

IG: It was a team plan to try and put somebody in the breakaway and I knew I would get up there and try to help so it gives me a lot of confidence, for sure. To have that kind of day was awesome. I felt really good.

CN: What's next on your programme?

IG: I'm racing some one-days, then Catalunya and then the Tour of Turkey. I don't know about any Grand Tours yet, but maybe the Vuelta, which would be really exciting if I got the opportunity.