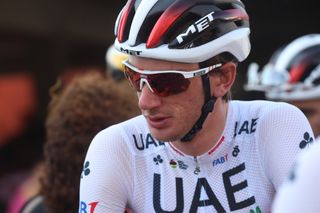 A young rider joining a new team on another continent usually feels himself cast among strangers. Not so for Brandon McNulty, who found himself catching up with some old acquaintances when he linked up with UAE Team Emirates for the first time this winter.

Mikkel Bjerg, the Dane with whom he vied for time trialling supremacy at the junior and under-23 levels, is a fellow neophyte. Another contemporary, Jasper Philipsen, is in his second year on the team, as is Tadej Pogačar, who was among those defeated by McNulty at the Junior Peace Race in 2015.

UAE Team Emirates have invested in youth in recent seasons in the manner of a baseball team carefully rebuilding its roster by stockpiling draft picks rather than relying on big splashes in free agency.

The Theo Epstein figure of the operation is Matxín Joxean Fernández, who first made contact with McNulty in 2018. Although McNulty preferred to stay put for another season at Rally Cycling at that point, his decision to join UAE Team Emirates this season was based largely on their emphasis on developing young talent.

"I think they've shown a huge interest in developing guys for three to five years down the road," McNulty told Cyclingnews on the eve of the Vuelta a San Juan, his first outing with his new team.  "Last year, I watched what happened with the team. From Pogacar and Philipsen and the other young guys, it was obvious that they were serious about it. It's clear that they're looking to the future, which I think is good for my situation."

It is only natural for a young rider to compare himself with his peers, but McNulty is mindful that athletes can develop at wildly different rates in their late teens and early twenties. Pogačar's startling debut season, which culminated in three stage wins and third overall at the Vuelta a España, is broadly encouraging is some respects, but wholly irrelevant in others. McNulty will, as ever, follow his own path.

"I think everyone has their own pace, the same with Pogačar," he said. "When we were juniors, I remember beating him and now he's pretty incredible. Everyone has their own rate of development, but it's exciting when guys you like and know well are doing well. It's motivating for everyone."

McNulty has carefully calibrated his own evolution these past three years. After scorching to a stylish victory in the junior time trial at the Doha Worlds in 2016, received wisdom suggested that he should do what talented young American riders have tended to do since the days of Jock Boyer – namely, go to Europe for the traditional maturation ordeal of harsh lessons imparted by the school of hard knocks.

He had the patience to take the road less travelled by, and opted to join Rally, then a Continental outfit with a largely US programme. Had McNulty followed a more traditional pathway, his talent would likely have propelled him to the same destination, the WorldTour, but the experience would undoubtedly have been very different. This way he could base himself at home in Phoenix while still weaning himself on a steady diet of European racing.

"There's definitely been a lot of Americans who have gone and spent eight months of the year in Europe and they hated their life. As a junior, I remember being in the national team house in Sittard, and the under-23 team would be there at the same time. All the guys who were there for a long time were depressed and stuff, and I didn't want to do that. But with Rally, it was kind of the best of both worlds," McNulty said, and joked: "I lived at home and then we came over to Europe and got out heads kicked in."

It surely helped that Rally's development roughly matched McNulty's own. They moved up to Pro Continental level in his second year and earned an invitation to the Tour de Suisse in 2019.

"When I went to Rally, I wondered if I had made the right decision but now when I look back, I see that they progressed along with me," said McNulty, who paid particular tribute to the example offered by men like Danny Pate and Svein Tuft, who finished their careers on the team. "Whenever Svein was around, the team just stepped up. He kind of kept everyone in line and made sure we were all doing the right things."

McNulty knew he was headed in the right direction during his second season at Rally, and the confirmation came in his third, when he landed overall victory at the Giro di Sicilia after claiming a remarkable solo victory in miserable conditions in the baroque heart of Ragusa and then grimly defending his lead on the final haul up Mount Etna. Although a subsequent illness impeded him at the Tour of California and Tour de Suisse, that Sicilian win effectively rubberstamped McNulty's promotion to the WorldTour.

"It was a bit of a relief," he said. "Even in 2018 I had several close calls throughout the year and early in 2019 I was getting some decent results, so it was nice to actually win something for once. That kind of solidified that I was ready to make the jump this year."

McNulty makes his debut for UAE Team Emirates at the Vuelta a San Juan on Sunday, and although he was stricken by a slight illness on arriving in Argentina, the 21-year-old will hope for an early opportunity to showcase his talent on the stage 3 time trial to Punta Negra. Riders will tackle the 15.1km test on their regular road bikes, but McNulty believes that the stage will still favour out-and-out time triallists.

"It's not like a 3k prologue. It's 15k time trial, so it's the same principle, I guess, but just on a different bike," he said. "We're going into this with no pressure, but I'll ride to try to get a good GC result between the time trial and the queen stage [to Alto Colorado on stage 5 – ed.]"

Ahead of the 2019 season, McNulty had wondered if his future might ultimately lie in one-day races, but his climbing performances last year have encouraged him, for now at least, to continue to explore his general classification prospects.

"Obviously, now it more and more points towards riding for GC, but I don't want to completely limit myself," said McNulty, whose 2020 programme will also include the Ardennes Classics.

His calendar is primarily populated, however, by stage races. After Argentina, he travels to Andalusia for the Ruta del Sol and Paris-Nice is on the agenda in March, while a Grand Tour debut at the Vuelta a España already looks a distinct possibility. Another encouraging note: last season, a former Rally teammate, Sepp Kuss, scored a stage win in Spain, having shone there as a neo-professional in 2018.

"I did almost every race with them as juniors," McNulty said. Half the [US national] team from my year is the WorldTour, which is super cool, because we're all good friends."

Even in the arid plains of San Juan, McNulty can't help crossing paths with old friends. Fellow Arizonan Travis McCabe, who hails from two hours down the road in Tucson, is here making his debut for Israel Start-Up Nation. The WorldTour, it seems, is a destination with no set route.