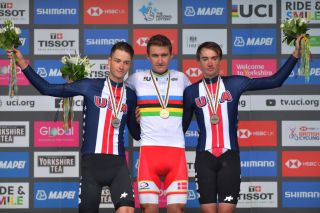 Americans Ian Garrison and Brandon McNulty hugged before taking their places on the podium after securing the silver and bronze medals in the under-23 time trial at the 2019 UCI Road World Championships in Yorkshire.

The double medals were more than they could have hoped for against dominant Danish time trialist Mikkel Bjerg, who secured his third consecutive world title.

"I would love to win a world title in the future, and make that possible," Garrison told Cyclingnews following a nail-biting wait in the hot seat after setting the fastest time early on.

"For me, it’s all about development, over the years, and I’ve been getting better and better. This is just a stepping stone and I hope to keep learning and developing into the future."

Garrison, the US time trial national champion, covered the wet 30km course in a benchmark time of 40:46. He sat in the hot seat for over an hour, and even watched his Team USA teammate McNulty finish just one second slower.

Defending champion Bjerg, the last rider of the day, stormed through the finish line 26 seconds faster to take the rainbow jersey, leaving the two American teammates to settle for silver and bronze.

"It was nerve-wracking," Garrison told Cyclingnews. "I would have loved to have gotten the rainbow jersey, but I’m also happy for Mikkel Bjerg. He’s my [Hagens Berman Axeon] teammate and I know how hard he works."

Rain soaked the course during the under-23 men’s time trial that left several sections of standing water on the inside corners of the circuit. Although there were crashes, McNulty said the conditions made the route slick but that he didn’t view it as being too dangerous.

"The worst was the big puddles because you lost all control of the bike," McNulty told Cyclingnews. "Obviously, the corners were a bit more tricky but that was the same for everyone and we were expecting it."

Garrison also said that as long as riders were cautious the rain didn’t affect the outcome of the event.

"I had no bobbles or anything," he said.

"My philosophy is that you can’t change anything, you just have to go as fast as you can with what you’re given. That’s what I did. I didn’t want to let the rain affect my ride. I took it as it came and tried to avoid [the standing water] as I came up on it. I went through most of them, but I was able to avoid a couple of them.

"I always try to keep with what I know, stay relaxed and focused. Obviously, it was a bit more of a challenge today but I felt like I was able to do the best ride that I could. The conditions made the time trial more dangerous, but aside from a few downhills… it’s as dangerous as you wanted to make it. You just have to go with what you’re given."

Garrison and Bjerg have been part of Axel Merckx’s Hagens Berman Axeon team during their development years as under-23 riders. Bjerg, 20, is set to join UAE Team Emirates for the next three seasons. Garrison, 21, said he has been offered a couple of contracts but hasn’t yet decided on what team he will move to in 2020, although he said he would like to eventually be racing in the WorldTour.

"It’s been really positive for me to be around Mikkel," Garrison told Cyclingnews.

"I’ve learned a lot from him, with how focused and specific he is on time trialing, and it’s been great for the both of us. We get along well and developed together. He’s just one step ahead at this moment. I hope to stay friends with him throughout the years."

Garrison said that his years with Hagens Berman Axeon have been valuable to his development toward the elite ranks. The team will be moving down from Professional Continental to Continental in 2020 but Garrison continues to see the team as a valuable option for young riders to develop.

"I don’t think it’s disappointing that the team will be Continental next year," Garrison told Cyclingnews.

"I think it will be good for the development no matter what. We’ve gotten to do some bigger races this year, and I’ve learned a lot from that, but you also learn a lot by doing smaller races. It won’t hinder the development of the team. In the end, it will still be positive.

"I have also appreciated USA Cycling’s support and they’ve helped me develop quite a bit. I owe a debt of gratitude to both USA Cycling and Hagens Berman Axeon."

McNulty, 21, has spent the last three seasons racing with Rally-UHC, and like Bjerg, signed a contract to spend the next three with UAE Team Emirates.

"Obviously, it’s no fun [racing against Mikkel Bjerg] but he’s a great competitor and we’ll be teammates next year, so that will be exciting," he said.

"It may take a few years after moving up the elites but winning a world title in the time trial is my goal," McNulty told Cyclingnews.