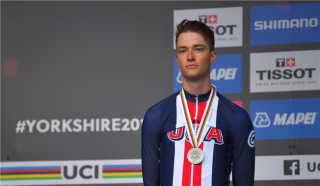 American time trial champion Ian Garrison will move up to the WorldTour having signed a two-year contract with the Deceuninck-QuickStep that will take him through 2021. The 21-year-old has spent the last three years of his career under the tutelage of Axel Merckx at Hagens Berman Axeon but is looking forward to testing his legs against the top-tier of professional cycling.

"I am really excited," Garrison said in a team press release. "It is an incredible opportunity to ride with a squad of this level. It is something that I have always dreamed of, as I have been a fan of the Wolfpack for a long time and watched them race, so I am excited to be a part of it and learn.

"I am still young at 21 and I want to have a long career and seeing the progress that Deceuninck – Quick-Step have helped other young riders make is a big part of my decision and trusting in that they can get the best from me."

Garrison won the elite men’s time trial title at the USA Cycling National Championships in June. At the UCI Road World Championships in Yorkshire in September, he was one of two Americans that stood on the podium in the under-23 men’s time trial. Mikkel Bjerg from Denmark won the world title while Garrison earned the silver medal and Brandon McNulty the bronze. McNulty and Bjerg will both step up to WorldTour level with UAE Team Emirates next season.

"I am very happy to add another young and talented rider to our roster," said Deceuninck-QuickStep CEO Patrick Lefevere. "We are always on the lookout for riders who have potential that we can help to develop, and while Ian has already shown that he can compete with the best, we hope that we can help him become even stronger. To win the Elite ITT title at such a young age is proof of the fact that he already has the talent and commitment to make it, and we are looking forward to working with him."

Garrison earned the bronze medal in the junior men’s time trial at the 2016 World Championships and then joined Merckx’s team in 2017. During his three years racing for the American outfit, he won a stage of the Tour de Beauce, and placed on the podium at Le Triptyque des Monts et Chateaux and Gent-Wevelgem/Kattekoers-Iper.

Garrison said he grew up riding bikes with his parents. He mixed road, cyclo-cross and track into his racing programme, while watching live streaming of the Grand Tours. He thanked Merckx and his teammates for supporting his career over the last three years, which enabled him to reach the WorldTour.

"I just loved watching the Tour de France in the summer, so I knew all about Deceuninck – Quick-Step and what a special team they are, and now I’m over the moon knowing I will pull on their jersey in the next two years," he said.

"At the same time, I want to say a big thanks to everyone at Hagens Berman Axeon for believing in me and helping me become a better rider."