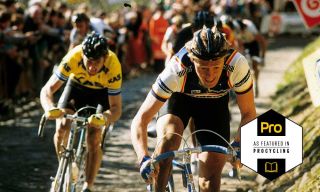 The Belgian rider made a splash with a brace of memorable wet-weather wins in Flanders and Roubaix in the mid-80s. But that was just a coincidence, he reckons.

In 1985, Eric Vanderaerden won the Ronde van Vlaanderen as Belgian champion in dreadful weather. In similar conditions, he sprinted to a Paris-Roubaix victory in 1987. After a 13-year pro career Vanderaerden turned directeur sportif before helping out as a VIP driver for various incarnations of the Lotto-Soudal team.

In 2013, Vanderaerden survived a heart attack. He recovered quickly and is ready to drive guests around during the 2015 season. The now 53-year-old Belgian tells us what impact adverse weather has on racing in the Classics.

Your wins in both Flanders and Roubaix were both captured in rainy conditions. Was that coincidence?

It was wet, that's for sure. I don't know if I was better in the rain than others but I managed to get over it quickly, especially during the first part of my career. From 1984-86 there were riders in my team who said, 'Tomorrow's going to be more than 200km in the rain. That will be much against my will.' That means that already before the race a certain percentage of riders is throwing in the towel.

I didn't like the rain either but I had no problems with it. Certainly not in my younger years. When I got older I struggled more with it. I quickly managed to get over it, knowing you get warm again after the race. During the race everybody is cold and suffering. I dealt pretty well with it.

When did you 'get over it'?

The night before the race I wasn't too worried. The weather could always turn around the next morning. My moment was at the start line. When I heard somebody complaining about the weather I thought, 'That is one more down.' The more I heard it, the better.

During your Ronde victory of 1985 you flatted just before the Koppenberg. TV images show you slaloming on your bike through a peloton that walks up the cobbled climb – you managed to overtake most of the peloton. You went on to win and during the post-race interview you already expressed your surprise about being able to ride up the Koppenberg. What happened there?

That too was a matter of belief. Some riders reach the Koppenberg with the idea that they are reaching a monstrous climb where they would definitely have to set foot on the ground because it wouldn't be even possible to reach the top on the bike if it was wet. It was all in my advantage.

Because of that natural selection and also because of the cyclo-cross experience I had from my younger years I realised my chances for a victory were increasing a lot. From the reduced peloton that was left in the race there were many more riders thrown out of contention for the win.

During that Ronde van Vlaanderen you're battling Hennie Kuiper together with your teammate Phil Anderson. When you jumped away from the chase group in search of Kuiper, Anderson went after you. That would cause trouble nowadays. Not back then?

We were both able to win the race and we both wanted to win it. At that moment there was no contact with the team car. We were together in the lead group and awaiting the Mur [de Grammont]. The first one to jump on the Mur and keep up his effort would win.

Rivalry? At that moment, yes. We were riding like Mapei has been riding for years. Such as when Mapei rode on the velodrome with three riders; then the team car decides who becomes one, two and three. It's normal that he was disappointed back then. If I had not won then I would have been disappointed too.

Do you think it's possible to compare the characteristics of modern racing with your days?

It's different. Cycling has changed a lot. It's become modern through evolution. It's certainly hard to compare. It's become nicer [for the riders]. Some say it's become boring. They say that we raced each other more than now. Every era has its characteristics. Now things are much more arranged for the riders.

When I'm a VIP driver now and when we're at a race in Flanders we see the race about six times. Every time we need to be ready with wheels and bottles in case a rider needs it. In our time we started with two bottles and from there we had to take care of ourselves. It was possible to ask your father or an uncle to watch the race and hand you a bottle somewhere on the course. Now there are three team cars and two VIP cars who are always ready with bottles, whatever the weather is like.

Riders take advantage of that situation, too. The nutrition has changed a lot. Drinking has become more important.

It's not often the Ronde or Roubaix are raced in the wet. You managed to win each race once in wet conditions. Is it partly down to dry weather conditions that you retired somewhat early without winning those races again?

I don't think so. There are so things – crashes, bad luck, a flat tyre, a bad day – that can have an influence. If you want to win a big Classic you have to be super.

I was quite young when I was at my top. When I was 30 years old my heydays were over. We raced a lot, as well. In those days that was normal.