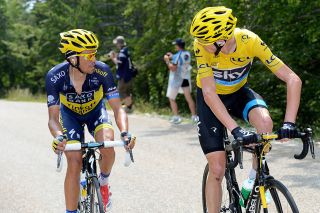 Alberto Contador is convinced that Chris Froome will be able to challenge Team Ineos in next year's Tour de France and go for the overall victory ‚Äì whether it be for a fifth or sixth time.

Contador is convinced that despite the Briton‚Äôs veteran status and his decision to ride for an inexperienced Grand Tour squad like Israel Start-Up Nation, Froome will still be a Tour de France contender.

One of Froome's most dangerous rivals in his time, Contador also told Cyclingnews he believes that Team Ineos should include Froome in their line-up for the Tour de France despite possible power struggles within the squad. As for El Pistolero himself, despite recently setting an Everesting record on his new provisionally named brand of 'A-bikes', Contador says he is not planning a comeback from his 2017 retirement.

As Contador sees it, Froome's change of team to Israel Start-Up Nation in 2021 is not a risky one.

Boonen: If anyone can dismantle Ineos, it's Chris Froome

"Actually, it makes sense. He's won four Tours, the Giro and the Vuelta and he still feels strong enough to fight for these races," Contador tells Cyclingnews during an exclusive interview.

“I think Bernal is going to be one of those riders who shapes a whole era of Grand Tour bike racing and he is progressing very fast. So if Froome stayed at Team Ineos he would either have to change objectives or work for Bernal."

All of which makes Froome's departure more logical and his move to Israel Start-Up Nation.

"Israel want to move up a level and in theory you can‚Äôt reveal new signings until August. But I'm sure that they'll be looking around right now for riders to back up Froome, because otherwise you won‚Äôt be able to benefit from what Froome can offer you as fully as you‚Äôd like," Contador points out.

Contador believes that one factor in Israel Start-up Nation's favour when it comes to boosting their Grand Tour firepower "is that there are a lot of names on the market right now. Other years, the big stars are already tied to a team. Not this time."

Contador is excited about seeing Froome take on Team Ineos, predicting it will be far more interesting than the current race scenario.

"Let‚Äôs not forget Jumbo-Visma either, they can give Team Ineos a good run for their money, but getting Froome there [to ISN] will spice things up, for sure."

Contador believes modern-day racing and technology make it easier for an older rider like Froome to continue to make an impact.

"In cycling today, efforts are so much more measured and calculated. That enables riders to go on racing until they are much older," he suggests.

"I think a rider, these days, can be fighting for victory in a Grand Tour up until they‚Äôre 38 or 39 ‚Äì and win it. There‚Äôs the example of Chris Horner at the Vuelta a España in 2013. But in the case of multiple Grand Tour winners like Froome, they've got the experience to go on doing it too."

"In my opinion, next year, Froome will still be one of the top favourites for the Tour de France."

Selection for the Tour de France

First up, though, is this year's Tour de France, where Contador says that the decision to select Froome ‚Äì or not for Team Ineos' final eight-rider squad "depends, totally, on what is happening inside Ineos."

He believes Team Ineos would make a mistake if Froome was not one of their eight riders on the start line in Nice on August 29th.

"I think the top names in Team Ineos have always treated each other considerately and courteously and as far as I can see, there hasn't been any friction between the three. On top of that, I don't think any of the Ineos leaders wants to 'stop' another rider from taking part ‚Äì be it Thomas, Froome or Bernal," Contador says.

He knows what he is talking about, having battled with Lance Armstrong at the 2009 Tour de France for team leadership before going on to win the race. Contador ignored team orders to go on the attack but Astana reached Paris with two riders on the podium: Contador in the yellow jersey and Armstrong third, although the American was later was stripped of his third place overall.

"Any team wants to take its best riders to the Tour, that's only logical. Might it be complicated to manage that? Time will tell. But the 2009 Tour has certain parallels, and we resolved it well, and it was a triumph for the team," Contador suggests, perhaps forgetting the tension and conflict with Armstrong's entourage.

"Even if it‚Äôs a bit more stressful for the Ineos team, I think the benefits outweigh any possible disadvantages."

As for the new Everesting record Contador set last week, his success had a lot to do with his 'escaping' from never-ending home trainer sessions during Spain's three-month lockdown.

"I started out training to start losing weight after the lockdown ended, then once you start training then you want to get more and more kilometres under your belt," Contador explains simply.

"I far prefer to be out on the road, training. I had a bit of free time because all the usual trips away for work have been cancelled. On top of that, maybe during lockdown you couldn‚Äôt go out for a drink with your friends, but it was very easy to have a beer or two during online chats and I needed to keep myself in good shape."

Mixing it up with Everesting was something that happened by chance.

"I was out training near Madrid, and I went up the Morcuera mountain pass twice in a single day. Some MTB riders were at the top both times I got to the top. We got chatting and they said if I was that keen on going up climbs I should try Everesting."

After some more investigating about the record and how it worked, and following a five-day build-up, Contador rode up and down the 6.8 kilometre Navalpelegrin climb near Madrid, including a segment at 19 per cent, 78 times during his Everesting attempt. He rode for over seven hours and beat EF Pro Cycling's Lachlan Morton‚Äôs record in the process by 2:37.

The climbing was hard for obvious reasons, while the descents had their own challenges.

"Doing it so many times, the last few I was really struggling," Contador admitts. "It was tricky because it was a narrow little climb, technical and wooded and it had a very bad bend halfway up."

However the corner helped Contador put the provisionally named new 'A-bike' through its paces on the descent.

"I had to brake hard and go from 90 kph to nothing and I had to choose the right line each time round the corner, so it was a good test," he says.

Contador hopes that the bike ‚Äì with a to-be-revealed definitive name and after he continues to put it through his paces on the Sierras around Madrid ‚Äì will have its official presentation in late September.

However, if the bike will be on the market this autumn, rumours, sparked by his Everesting record, that Contador could return to racing, are not grounded in fact.

“I love racing, and I love following it,” Contador tells Cyclingnews. "But I left cycling in the best way possible."

"And although sometimes when you think about going back to racing it's like an itch you can‚Äôt scratch, I always end up telling myself that I've got a great life at the moment and I prefer to do cycling the way I do now: go Everesting and then be able to drink and eat whatever I feel like eating or drinking afterwards!"