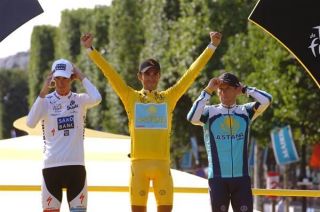 Alberto Contador has given his version of the behind-the-scenes story of the tensely fought 2009 Tour de France when he beat his Astana teammate Lance Armstrong to take his second overall win.

The power struggle between the then up-and-coming Contador and veteran Armstrong, the winner (at that time) of seven Tours, is well known, with Contador left trailing when his Astana team attacked en masse in a windy stage 3, then counter-attacking en route to Andorra and again in Switzerland.

In a lengthy video interview with YouTube vlogger Valentí Sanjuan, Contador has lifted the lid on his version of the behind-the-scenes tension that built between himself and the Texan during that year's Tour de France.

"The Tour began with a great deal of controversy over whether the leader was Armstrong or me," said Contador, who was keen to win the race for a second time after Astana was barred from the 2008 race, however, he was well aware of Armstrong's own ambitions.

"I went to see Lance before the race and he told me it was better for him that I won it. But then I saw he'd said on Twitter 'we'll see who is the leader in the time trial tomorrow'. It was a waste of my time and I missed out on a siesta as well."

It was a difficult day of echelons, where Contador was left trailing despite being the nominal leader because - in his somewhat ironic take on things - he said, "the race radios must have broken", the crunch stage came on stage 7 to Andorra, the race's first summit finish.

"Our team director [Johan] Bruyneel had said in a meeting the day before - on the rest day in Barcelona - that "we want to take things calmly on the mountains, when I wanted to go on the attack. I asked a teammate who was neutral and he said 'Alberto, rather than you looking stupid, it's better that he [Armstrong] does.'"

Contador duly went on the attack at Arcalis in Andorra, regaining enough time on Armstrong to move ahead overall, which sparked a row on the team bus with the American the following day.

"But then he came up to me after everybody else had left the bus after the meeting and said, in Spanish 'No me jodas' - [Don't fuck with me - ed.]"

Apart from highlighting the tension, Contador also revealed more details about better known incidents, such as how he had to buy wheels from an external source - the Milram team - because the TT wheels in the squad were reserved for Armstrong. Finally, the Spaniard won both the stage 18 time trial - and the Tour de France, with Armstrong finishing third in Paris.

Back in 2009, Armstrong recognised in an interview with Eurosport that there had been "real tension" between himself and Contador and that "other people were involved in the tensions and there were quiet dinner tables more than once."

"It's not anything that I've ever experienced before but we did our job, and it ended up being OK."

After the race, Contador insisted that  "The days in the hotel were harder than those on the road."

In 2010, the two were in different teams, Armstrong and Bruyneel at RadioShack, and Contador at Astana for a final year.