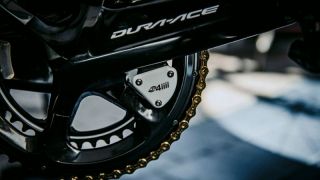 Power meters are crucial to any training programme, and if you don't own a smart trainer, they can be your ticket into the world of virtual cycling.

Ensuring you have the best power meter can mean the difference between accurately tracking your performance and pure guesswork. A power meter that doesn't perform consistently and accurately can throw off a session, causing inadequate training stimulus and subsequently, sub-optimal training. Worse, an under-reading power meter can cause poor pacing strategy in races or FTP testing and longer-term, could lead to overtraining.

The humble power meter has been around in the pro peloton for over 30 years but has only recently become de rigueur among amateur riders wanting to train more clinically and race more effectively, and as data becomes more widely used, the demand for accuracy and consistency is higher than ever.

The trackable, quantifiable and comparable nature of data means the best power meters take the guesswork out of your training and allow you to accurately track your performance by way of power output, cadence, and even kilojoule expenditure.

Over the past several years, power meters have become more affordable thanks to advances in technology and the introduction of a host of new competitors to the fray. There are several types of power meter configurations available which measure power at the rear hub, crank spider, crank arms, bottom bracket or pedals, but choosing the right one comes down to four factors: price, compatibility, accuracy and weight.

Here’s what to look for in a power meter, followed by our pick of the best.

How to choose a power meter

As the name suggests, a power meter is a compact electronic device that calculates power by way of a strain gauge. The strain gauge transduces flex into electrical resistance based on how much strain or torque is applied and multiplies it by the angular velocity (cadence) to calculate power, which is measured in watts. Sounds complicated, right? Thankfully, your cycling computer does all the maths for you, processing the data it receives from the power meter via an ANT+ or Bluetooth connection.

That said, not all power meters are created equal – the accuracy and reliability of each unit hinge around a number of complex parameters, the most pertinent being the quality of the materials used in its construction and number of strain gauges fitted. As you can imagine, manufacturing such a device is an intricate process which explains why these components cost as much as they do.

It’s easy to get overwhelmed by the marketing jargon and complex specification sheets when shopping for a power meter. There are five distinct power meter types based on where it’s fitted to the bicycle, so it’s important to factor in compatibility before making a decision. (Most manufacturers have compatibility charts on their website).

Hub-based power meters are some of the most affordable, reliable and compatible units available. PowerTap is the main protagonist in this segment and its G3 hub has earned a reputation for its hardy and bullet-proof nature. One of the many benefits of using a hub-based system is the convenience of swapping it between bikes. This has become somewhat more complex by new hub standards (quick release vs bolt-thru and disc vs rim), but assuming your wheel will fit both bikes, the power meter can go with it.

Compared to other power meters, the location of a hub-based unit may result in marginally lower power readings owing to drivetrain losses.

Stages Cycling brought affordability and reliability to the market with its left-side crank concept in 2012, and made them cheaper still in 2020. Weighing just 20 grams it redefined the segment with a catalogue comprising a range of crank arms in both aluminium and carbon fibre guise. Since then, 4iiii Precision has jumped on the power bandwagon with its off-the-shelf, left-side Shimano crank arms. (Power pods for other models can be retrofitted as a ‘factory installation’). Crank-based power meters are extremely light and affordable but be wary of frame clearance issues on older bikes.

If choosing a left-sided option, the only compatibility consideration you need, is to ensure the crank will fit the spindle from the right-side, and that the crank length matches the right.

The bottom bracket power meter is not as popular as other designs as it is more difficult to install and isn’t compatible with all bottom bracket systems. But the results don’t lie: Rotor claims its INpower units are 99-percent accurate (variance of 1 percent). Another benefit is that the power meter’s innards, battery and electronics are housed within the bottom bracket for added protection and weight balance.

Not only are power pedals easy to swap between bikes but the plug-and-play nature nullifies the need for complex fitting procedures. Available in two distinct guises: single- or dual-sided, it’s the latter which can independently measure left-right balance as well as calculate pedal smoothness and efficiency. The only pitfall stems from the extra weight of the electronics, strain gauge and battery pack located within the pedal assembly. PowerTap, Look, Garmin and Favero are the chief players in this segment with little between them in terms of performance and reliability.

They can even be swapped onto an indoor or gym bike for some Zwift action should you be away from home without a bike.

Spider-based power meters rose to prominence in the late 1980s with SRM who pioneered the concept. Available in various shapes and sizes these power meters are compatible with most bottom bracket and chainring BCD patterns and can be purchased individually as a spider or complete chainset. Leading products here come from brands such as SRM, Quarq and Power2Max, each of which offers varying price points, weights and power-measuring functionality.

The compatibility here can be somewhat daunting, but manufacturers simplify things by offering spider-based power meters based upon the make-model of the crank you're using. The only thing to then consider is chainring BCD; you'll generally have 4- or 5- bolt configuration, and the bolt-circle-diameter will generally be written on your current chainrings.

Favero’s Assioma power pedals are lighter, cheaper and more accurate than PowerTap and Garmin’s offerings, making them our number one choice.

It's a tidy-looking package - all the sensors and strain gauges are located in a housing next to the pedal body, which measures directly at each axle. The Assiomas look like an ordinary pedal, and it keeps the electronics from getting damaged by falls or impacts, so it's easier to maintain down the line. They're also IP67 certified.

Unlike other power meters that harvest data based on the angular velocity of the crank arm through each rotation, the Assioma uses an instantaneous angular velocity (IAV) measuring technique thanks to an on-board gyroscopic sensor. According to Favero, the IAV way of harvesting data is class-leading, with accuracy to a maximum deviation of only one percent.

Aesthetically, and mechanically, one of the best units on the market

Quarq’s latest spider-based masterpiece, the DZero, can be ordered as an individual spider or as a complete crankset in either aluminium or carbon. Not only are the strain gauges located within the spider but it also benefits from a built-in accelerometer to simplify function and boost accuracy — with a variance of only 1.5 percent.

The DZero power meter is compatible with all bottom bracket types and BCD configurations and there’s even a version for Shimano-specific chainrings called DFour. The DZero’s biggest selling point is its ability to measure power from both the left and right leg which helps improve pedal efficiency and power balance.

Weighing in at a scant 9g more than the crank it'll replace, the 4iiii Precision power meter represents the pinnacle of lightweight options on the market. Available as a crank-based left-side-only, or dual-sided unit the company claims it is 99 percent accurate.

The product portfolio comprises just three off-the-shelf options in the form of Shimano Dura-Ace, Ultegra and 105, but you can send your own crank directly to 4iiii Innovations to have a power pod retrofitted, something the company calls a ‘Factory Install’. Prospective buyers should be aware of compatibility issues pertaining to crank clearance at the chain-stays; 4iiii Innovations recommends checking this before ordering.

Compatible with most cycling computers

Now in its third generation, the Garmin Vector 3S pedals have ironed out all of the idiosyncrasies of its forebears and packaged them into a near-faultless, sleek-looking product.

At 316g a pair, they’re not the lightest pedals around but the convenience they offer as a portable training tool more than makes up for the added heft. Pairing them to a Garmin Edge via ANT+ or Bluetooth is simple — in fact, they’re compatible with most cycling computers.