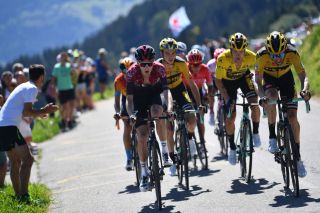 The 2020 Critérium du Dauphiné was reduced to just five days but still managed to pack plenty of drama and intrigue into its condensed format.

EF Pro Cycling's Daniel Martínez took home the yellow jersey after a thrilling final day's racing, while Jumbo-Visma and Ineos did battle but both left the race with big question marks over them ahead of the Tour de France.

With less than two weeks before the start of the Tour, the Dauphiné left us with no shortage of talking points.

Dumoulin: Dauphiné descent was a disgrace

Schachmann taken down by car in Il Lombardia

Rider safety and the need for strikes

Something needs to be done. For too long, rider safety has been an after-thought for some – but not all – race organisers, while the bodies responsible for the health and safety of riders all too often go missing when the latest crisis arises.

At the Tour of Poland, the organisers tried to pretend that sprinting downhill at 80kph was both sensible and safe, while at Il Lombardia we had pensioners playing too fast, too furious with Bora riders, and descents that have historically caused near-fatal crashes included without any extra safety measures. At the Dauphiné, ASO – the most powerful race organiser in the world – allowed a steep gravel descent full of potholes to be included in their pre-Tour de France race.

The UCI’s quick-fire statement on Poland, laying the full blame at the feet of Dylan Groenewegen, was the action of a petrified organisation unable to gauge the full magnitude of all the factors in play. Quite frankly, it was an appalling move.

Will it actually take the death of a rider before these matters are properly addressed, because that’s where we’re heading?

The CPA's response to the descent at the Dauphiné that left both Steven Kruijswijk and Emanuel Buchmann needing medical assistance was two-fold. They issued a press release calling for a committee to be set up, and then took the time to pen an open letter to Jumbo-Visma manager Richard Plugge after he had the temerity to call them out on their shortcomings. The men's CPA are not fit for purpose, they are weak, and no photo-op with David Lappartient in a meeting room in December is going to change that. They need overhauling.

At the same time, the riders need to do more. Nullifying the descent on stage 5 was a token measure and all your Tweets on Saturday after Remco Evenepoel's heart-stopping crash came from the right place but they're now old news. You mean well, and you're the ones with skin in the game, but action is needed from the organisation that you ultimately help to fund.

Instead of go-slows on descents, try striking. Sit down on the side of the road and demand that ASO, the UCI and your CPA listen properly and take action. When you start messing with their TV schedules and the precious revenue streams your own employers seem so preoccupied with, then maybe you'll finally get what you need.

Cycling will always carry an element of risk and danger – no-one would disagree with that – but there are mitigating measures that can be put in place. Take action now, before it’s too late.

On to the racing, and what a final day of action fans were treated to. While ASO should be criticized for their shortcomings, they should also be applauded for everything they got right, and the five summit finishes offered up something different each day, with Primož Roglič and a star-studded cast going toe-to-toe.

If the Tour goes ahead, and it’s this exciting, it could eclipse even last year’s drama. In fairness to ASO, they rarely get it wrong with the Dauphiné, but the final stage was arguably the best day of racing we’ve seen all year. Losing Roglič changed the dynamics, there’s no doubt, but the early attacks and the final nail-biting climax saw a blend of Grand Tour experience in Pinot and Dumoulin duke it out with a new wave of Martínez, Martin, Pogačar, Sivakov and Kuss.

Matt Stephens, who at times carries Eurosport, summed it up perfectly when he talked about the old guard versus the new, as Kuss, Martínez, Pogačar and Sivakov put their more experienced rivals under immense pressure.

These scenes may not be replicated quite so dramatically at the Tour, when age and experience will help define the final week, and riders are unlikely to be so expressive for fear of losing a GC spot, but after this season’s long hiatus it felt wonderful to lose yourself in the excitement of a bike race.

Are Jumbo-Visma as good as they look?

The fact that the Dutch team lost both Steve Kruijswijk and Primož Roglič to crashes and subsequent injuries, yet still won the teams classification spoke volumes over the depth within their ranks.

Tony Martin is the German equivalent of the Duracell bunny – Duracell hase, if you’re wondering – and when he’s not winning one-day races at a canter Wout Van Aert looks like the best all-round domestique in the world. Kruijswijk was solid rather than spectacular, Dumoulin looks like he’s getting better and more confident with each pedal stroke, and Roglič – minus the road rash – is just as good as his pre-Giro levels of 2019.

Robert Gesink and George Bennett add steel and experience but the rider who epitomizes the team's improvements over the last 12 months is Sepp Kuss. That’s not to say the arrival of Dumoulin isn't a game-changer in the GC battle with Ineos, but Kuss was sensational during the Dauphiné. He was there for Roglic at every turn, and when the Slovenian crashed out it was the American who seized his chance and won the final stage. A year ago, Kuss was a promising climber who took a stage in the Vuelta a España but heading into the Tour he can now be considered the complete package, and his development could be the difference come the Tour.

At the same time, it’s still too early for Jumbo-Visma fans to get too excited. When the Tour caravan arrives in Nice in a little under two weeks, all the time gains from the Dauphiné and the Tour de l'Ain will count for nothing. Riders will start with a clean slate and Team Ineos will be ready. Roglič's and Kruijswijk's injuries mean time off the bike, and if Kruijswijk is missing from the Tour team the Dutch outfit will be unable to find a like-for-like replacement.

Are Ineos as bad as the results suggest?

Your defending Tour champion pulls out with a back injury after taking a kicking on back-to-back summit finishes, while your plan-B and plan-C combine to lose nearly two and a half hours over five days. To make matters worse, when you do try and impose yourself on the race, like on stage 2, you look like a shadow of your former selves, and prove to be totally ineffective.

Other than Pavel Sivakov showing some grit on stage 5, there was very little to reassure the Team Ineos management that the situation is salvageable, and when your directeur sportif is calling you out in the media, you know things are bad.

The glimmer of hope for Ineos fans is that this might be part of some Brailsford-Kerrison masterplan, in which we arrive at the third week of the Tour and Bernal’s back ailments and tired limbs have been replaced with a stripped down, lean, and perfectly in-tune athlete.

Thomas doesn’t look like he’s especially panicked, and the core of domestiques within the team know how to get the job done when it comes to winning the Tour de France. Aside from Bernal’s back, none of the team’s leaders took heavy falls – which will mean they head into their final training block fit and motivated. The Tour’s key stages remain so far down the road, that it’s almost pointless to predict podiums, and if the Dauphiné reminded us of anything it’s that everything can change in a split second.

Write Ineos off at your peril.

We can talk about the riders missing, the riders out of form, and the riders who didn’t make it round, but there’s no denying that Daniel Martínez was a thoroughly deserving winner of the five-day event. The 24-year-old may not have arrived at the Dauphiné with GC aspirations but he rose to the challenge nevertheless.

His stage 5 ride will fill most of the headlines but his efforts on stage 2 were equally important. First Sergio Higuita crashed and then Rigoberto Urán slipped back, leaving just Martínez to fly the flag for his struggling team on the final climbs. He passed that test, and then two more impressive rides came on stage 3 and 4.

However, he still came into stage 5 with a huge amount of work to do. In fact, out of all the riders within touching distance of Thibaut Pinot’s virtual lead, Martínez was probably the least fancied, but Slipstream have a habit of conjuring up magic when you least expect it. They did so at this very race back in 2014 with the now-retired Andrew Talansky, and on the road to Mégève they were at it again.

Martínez was alone but still made all the right moves at the right times and when it came to the final charge to the line the Colombian proved his worth. Pinot himself admitted at the finish that he simply didn’t have the legs. Come the Tour, EF have a tantalising trifecta of Urán, Higuita and Martínez, and while they lack the clout of Jumbo and Ineos, they do have the ability to light up a race. For the neutrals out there, that’s all you want.

Regardless of the racing hiatus from March to July, this has been a shocking season for Movistar. Just one win – courtesy of Marc Soler during one day at the Mallorca Challenge – is all they have to look back on. It’s a woeful return for Spain’s only WorldTour team and a damning indictment of how poorly they have worked in the transfer market for the last few years.

During the last winter they brought in 14 new faces – their largest turnover since 1994 – but instead of spreading their cash on depth and a number of areas, they went heavy on youth. That’s a fine policy if you have solid foundations but father time is finally catching up with Alejandro Valverde, while Enric Mas is far from the finished article.

Both riders were off the pace at the Dauphiné, while Soler appears to have stagnated once again. Team manager Eusebio Unzué has some incredible young talent within his ranks and Matteo Jorgenson looks like a real find but there are too many average, home-based riders within the team, and letting both Mikel Landa and Nairo Quintana leave created space that simply hasn’t been adequately filled.

Unless Valverde – who hasn't waited this many race days to take a win since his neo-pro season back in 2002 – can find his verve or Mas rediscovers the form of two years ago, this could be a very long block of racing for Movistar.