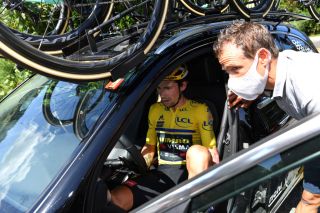 Jumbo-Visma manager Richard Plugge has said that the decision to withdraw team leader Primož Roglič prior to the final stage of the Critérium du Dauphiné was taken as a precautionary measure and should not affect his preparation for the Tour de France, which starts in a fortnight.

Roglič crashed heavily during the Dauphiné's penultimate stage, but managed to finish and defend the race leader's yellow jersey.

"He fell hard on his hip and we just want to see how he responds to that. It's better to be safe than sorry," Plugge said in Megève on Sunday morning after it was confirmed that Roglič wouldn't be starting the Dauphiné's final stage.

Asked if the Slovene rider had suffered a concussion after teammates reported him being dizzy immediately after the crash, Plugge explained: "He was dizzy, but that was more the result of hitting the deck really hard and he was more like, 'What happened?' But after a couple of minutes he was mentally OK. There's no worries about a concussion."

Roglič's withdrawal came 24 hours after Tour de France rival Egan Bernal quit the Dauphiné due to a back problem and was later seen training.

"No, I don't think we'll see Roglič training today," Plugge responded when asked if Roglič might follow the Colombian's example.

"I don't think it's going to disrupt Primoz's Tour preparation, I certainly hope not," Plugge added.

Jumbo-Visma climber Sepp Kuss was also confident that Roglič will make a quick recovery from his injuries.

"I think he'll be okay. But we have to be careful, you can still hurt yourself if you're racing with an injury. But I think he came out better than we thought," said the American.

Kuss said that Roglič got through Saturday's fourth stage thanks to "probably a lot of adrenaline. To me he still seemed really comfortable after the crash and he was doing fine."

The Jumbo leader became more aware of the extent of his injuries once he'd finished racing, added Kuss.

Plugge also provided an update on Steven Kruijswijk, who dislocated a shoulder when he crashed earlier in the same stage.

Kruijswijk had said via the team that "Next week, we will decide if I can start the Tour de France." However Plugge refused to speculate after both Roglic and Kruijswijk crashing hard.

"He's back home now in Monaco. He had a dislocated shoulder and a lot of road rash. The shoulder is back in, but the road rash is really severe. Hopefully it will heal very fast," Plugge said.

"It's premature to say anything more because we have to see how it goes tomorrow and the day after. These are the decisive days when it comes to seeing how he initially evolves from his wounds."

Plugge also confirmed that Jumbo-Visma DS Grischa Niermann had spoken to race organizer ASO about the Col de Plan Bois descent where Kruijswijk crashed and which was described as "a disgrace" by the team's co-leader Tom Dumoulin.

"Grischa said something to ASO," said Plugge. "Normally ASO have their act really together. Safety-wise ASO, the Dauphiné and the Tour de France are very good. On the other hand, this happens too often in racing nowadays. I think it's time to put safety in professional hands."