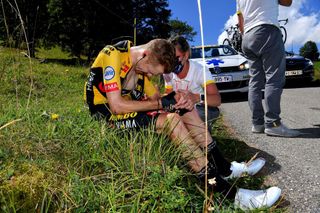 The CPA riders association have confirmed to Cyclingnews that the peloton neutralised the early kilometres of stage 5 of the Critérium du Dauphiné in protest to the poor road surface conditions during Saturday's stage 4 that sparked a crash and left Tour de France contenders Steven Kruijswijk (Jumbo-Visma) and Emanuel Buchmann (Bora-Hansgrohe) injured.

The CPA said the neutralization was a first sign of intent as they begin to take a stronger position on safety after the recent incidents involving Fabio Jakobsen at the Tour de Pologne and Remco Evenepoel at Il Lombardia.

A CPA statement said the riders and the CPA "asked to neutralize the first 10 km of descent of the fifth stage of the French race, saying that it is too dangerous and mentioning what happened at yesterday's 4th stage.

"The riders want to send a clear signal of protest to both the organizers and to the UCI referring to the serious crashes and accidents that have occurred in the recent races, asking for greater attention to their safety."

With no live television of the early racing, there was little evidence of the protest. The race website reported that the start was delayed due to two riders who had mechanical issues in the neutralised zone, though it's unclear if that was part of a CPA protest.

The CPA said it was ready to force the UCI and race organisers to do more to protect rider safety. They also want an overhaul of the UCI rules concerning safety obligations.

"The CPA asks the UCI and all stakeholders of cycling to set up a round table to start the revision of the regulations to get a clear feedback in terms of prevention and sanctions towards the race organizers. The purpose of this is to protect the physical integrity of the riders and to allow them to carry out their work in greater safety," the CPA said.

Tom Dumoulin described the opening Col de Plan Bois descent of the fourth stage as "a disgrace" after Kruijswijk crashed out, dislocating his shoulder. The injury has put Kruijswijk's Tour de France participation in doubt.

"It was a disgrace that that descent was in a race," the Dutchman said.

"The whole descent was really tricky but the first two or three kilometres were full of gravel, pot-holes, bumps in the road, 15 per cent drops down. That they still put things like this in a race is… well, I'm really angry about it and I'm pretty sorry for Stevie that he has to go home because of this because he was in great shape."

We no longer have confidence in the UCI controls

On Sunday his Jumbo-Visma team manager Richard Plugge revealed that a number of teams have talked about improving safety to protect their riders.

Plugge said they no longer have confidence in the safety control the UCI does at races and called for an external company to check and audit races so they respect the required safety measures to protect riders.

"I have talked a lot about this with other team leaders and we all say: we cannot continue to expose our riders to danger. We no longer have confidence in the controls that the UCI does," Plugge told Netherlands television channel NOS.

The UCI, the international cycling union, now checks itself whether a race meets the safety conditions.

"For example, there must be special conditions for the last kilometre with a bunch sprint, but also how barriers must be placed along the course.

"We hope that these can be introduced for next season. An (external) company can then say to the organization: it must be better, this is not good enough. That way problems can be solved, because it simply has to be safer for our riders."