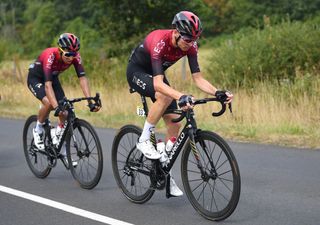 Team Ineos directeur sportif Gabriel Rasch has said that both Geraint Thomas and Chris Froome 'need to step up' and they haven’t been good enough at the Critérium du Dauphiné.

Rasch revealed that the decision to withdraw Egan Bernal from the Critérium du Dauphiné prior to the penultimate stage was taken as a precautionary measure after a previous back injury had flared up again.

“I think he could have done the stage for sure. But it’s not that much time from now to the Tour [de France] start so we want to make sure we have enough time to treat it properly and get him one hundred per cent for the Tour because that’s what’s really important for us,” said Rasch at the finish at Megève Altiport.

Rasch added that Ineos, “felt he’d had the racing he needed, really. He had his back injury that he’s had from before as well.” He also confirmed that Bernal had ridden back to the Ineos hotel from the stage 4 start in Ugine.

Team Ineos’ other Tour de France leaders – Geraint Thomas and Chris Froome – both lost significant time on the stage. Thomas finished 58th and trailed in over 16 minutes down on the leading riders, while Froome came home in 109th almost 27 minutes behind. Both riders sit outside the top 30 on GC and with the Tour de France just a few weeks away, there are legitimate questions over the rides’ form.

Asked about the performances of Thomas and Froome, Rasch explained: “G [Geraint] wanted to save his legs for tomorrow so let’s hope he has something in the tank tomorrow. I think they are continuing to progress a little bit, step-by-step. They’re not there yet but I’m optimistic they will be a step above this [at the Tour de France’s Grand Départ] in Nice.”

Rasch said he had been surprised by the “super-high” level of racing during the Dauphiné. “It seems like everybody has been training really well in lockdown and I think all the best riders, or pretty much all the best riders are here now, so the level is very, very high. And I hope after this race we will take a step up as a team.”