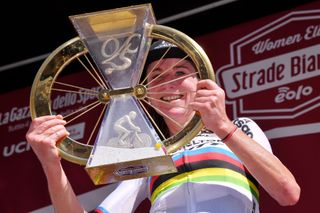 After an enforced mid-summer break due to the on-going global health crisis, Women's WorldTour racing returned to our screens with a bang.

Life or sport may not yet be back to normal, but Strade Bianche gave cycling fans a suitably dramatic return to top level racing with the high temperatures, dusty gravel roads and riders keen to get back into the mix of competition.

Annemiek van Vleuten (Mitchelton-Scott) showed that she is still the rider to beat going into this truncated season. Mavi Garcia (Alè BTC Ljubljana) gave as good as she got in the finale to take second and Leah Thomas (Équipe Paule Ka) battled back for third after coming a cropper in the final 20 kilometres.

Annemiek van Vleuten: You've got to take all that you can

Mavi Garcia: I thought I could win Strade Bianche

There was plenty to see at the first WorldTour race in this second attempt at the season and here are some of Cyclingnews’ takeaways from the 2020 Strade Bianche Women.

After winning her one and only race at the start of this season (Omloop Het Nieuwsblad), Van Vleuten has ensured the continuation of her 100 per cent winning record upon her return to racing. She arrived at Strade Bianche with three UCI wins in her back pocket already, at a series of one-day races in Spain.

It looked like the streak may come to an end as she, and several of the favourites, fell more than five minutes behind the race leader. Away from the eyes of the camera, and the race’s timing system it seems, Van Vleuten set about bridging the gap.

Just as it looked like Mavi Garcia might be about to hold on with her long-range solo attack, Van Vleuten appeared behind the chasers like a shark hunting its prey. She blew that group apart before using the steep ramps of the final gravel sectors to distance them and begin to bring back Garcia.

The effort of the chase was evident in her face in the final kilometres but she still had enough to gap Garcia on the final ascent to the Piazza del Campo and take her second win. Just two months away from her 38th birthday, Van Vleuten seems as strong as ever.

Strade Bianche was one of the first races to be postponed due to the coronavirus pandemic. Little did we know at the time just how long it would be before we saw the cycling season resume.

Usually, Strade Bianche sits neatly at the start of spring, where the weather is cooler and the potential for rain is always there. The lopsided season meant that the gravel race took place in one of the hottest months of the year, giving the riders another element that they ordinarily wouldn’t have to contend with.

Strade Bianche is a punishing race already and the heat made it even more so. The wide-open terrain provided no protection to the riders as the tackled the white roads of northern Italy. Van Vleuten revelled in the heat as she knew it would be hurting her rivals, and hurt them it did, as even at its quickest, the race speeds were well below the quickest timetable. Just 45 riders finished the race within the time limit, while 13 were cruelly deemed to be outside of it.

Mavi Garcia is a relative latecomer to the world of professional cycling, having switched from competing as a high-level duathlete in 2015 at the age of 31. Since her move to the sport, the now 36-year-old has wasted no time in securing strong results with the, 2015 Spanish road race title, the 2018 national time trial championship and a podium finish at the Tour de l’Ardeche under her belt.

Garcia showed that she had worked hard during the mid-season break by finishing second to Van Vleuten at the Emakumeen Nafarroako Klasikoa at the end of July. This was her first time at Strade Bianche and she made a bold move going solo with more than 40 kilometres and five gravel sectors remaining. At one point, it looked like Garcia’s bravery was about to pay off, until Van Vleuten came into the picture.

It wasn’t a done deal for Van Vleuten and Garcia was not intimidated as the world champion tried on several occasions to shake her from her wheel. Garcia had one last try as the pair hit the final climb, staring into the eyes of her contender as she moved past her on the steep slopes. It wasn’t to be for the victory, but it was an impressive ride in difficult conditions and Garcia will be one to watch in the coming months.

Even in this day and age, having any sort of television coverage for a women’s race still feels like a minor miracle. Saturday’s broadcast of the women’s race provided fans with a thrilling, edge of your seat, finale to watch. However, the coverage still felt lacking with next to no footage anything further back than the front two groups.

Strade Bianche is a challenging race for coverage due to the narrow roads and a second event running almost concurrently. There is only so much a race organiser can provide but it felt like we were denied the drama of Van Vleuten’s mighty chase out of the peloton, and the sight of the other favourites making their way back after losing contact earlier in the race.

Meanwhile, the timing for the gaps was patchy and misleading at times, leading the organisers to remove it from the screens altogether. The sporadic information left viewers without context at critical times. While it is great to be able to watch women’s racing rather than finding out about it through social media, there is still much work to do to ensure it is shown off to its fullest.

It is all too easy for a rider to panic when things are going wrong. Just as Leah Thomas (Equipe Paule Ka) ditched her companions and set off in search of Garcia, disaster struck as she dropped her chain on a gravel stretch. With no team car nearby, a well-meaning fan tried to give her a hand as she set off again but it hindered, rather than helped, her as she was given a shove just as her wheel moved from under her.

Thomas didn’t stress and had built up enough advantage over the chasers that she was able to slot back into the group as they came past. Until that point, Thomas had looked the strongest member of the chasing group and she was able to distance them again, but not before Van Vleuten had caught and gapped the group herself.

She made it over the line to give her new team sponsor its first WorldTour podium, holding off two former winners in the process, but Thomas must have wondered what might have been if she hadn’t had that mechanical. She was still delighted with her podium and, given her performance on the steeper sections of the course, she can take plenty of confidence going into whatever remains of this shortened 2020 season.