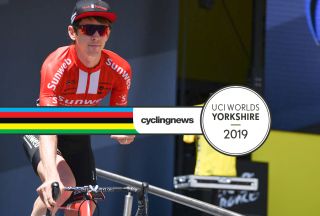 I was going to write a blog at the end of the Tour de France. There were definitely stories to tell: the confusion in the grupetto as we learned that stage 19 was canceled at the top of the climb; the shortened stage 20 that might be shortened again; a final push for glory on the Champs-Elysées derailed by a thrown chain.

Seeking a mental rest at the conclusion of my second Giro-Tour double, though, and eager to hang out with my wife and friends who had made the trip over to see the final few stages, I decided to give it a few days. The days ticked by, and suddenly I was leaving for San Sebastian. I would write the blog after that, and then I could have two races to write about.

San Sebastian went well when my post-Tour legs helped me to deliver our young talent Marc Hirschi into the key moment of the stage in a perfect position. My job was done on the first passage of the final climb, so I enjoyed the fanaticism of the Basque spectators before taking a shortcut to the finish.

I was finally on a real break for the first time since my season started, and suddenly the blog was the furthest thing from my mind as I sought to distance myself from racing for a couple of weeks. My wife and I agreed that I would enjoy my time off the bike much more if, rather than laying on the couch and watching Netflix in Girona, I was instead building baby furniture at home and preparing for an off-season adventure that will make our Patagonian backpacking trip seem like a walk in the park by comparison.

So off we flew to Colorado, and I expected to find some time to write a blog from home as I eased back into training. Then we landed stateside and I turned my phone on, seeing the news of Bjorg Lambrecht’s tragic death in the Tour of Poland. I was heartened to see the way the peloton was unified in its grief, but I could not possibly blog about the trivialities of bike racing while trying to process such a tragedy. His loss was a shocking reminder of how thin a razor’s edge we’re trying to balance on while racing, and it certainly prompted questions of why we risk it, and whether it’s worth it.

Then the American highways on the drive home reminded me that we risk our lives every time we get into a car, and the news cycle is filled with stories of tragedy. Even in my own experience, you never know when you will round a corner to find a car coming at you. And so, I was refreshed in my motivation to live the best life I can, which means racing with all my heart and being thankful that I can make a living racing a bicycle.

I savored every moment at home, deciding I would write a blog once life was quieter back in Girona. Then I blinked and was on my way back to Europe to finish out my season. Pushing for a selection to the US UCI Road World Championships team, I rode my time trial bike more than I ever have before. Every time I pushed the ‘lap’ button on my head unit to start a new interval, I had to convince myself that it would all be worth it, taking another step out onto the branch of hope—a branch that collapsed beneath me last year. Thankfully, this year all the hard work paid off with a selection (a time-trial victory in a Grand Tour definitely helps!), and my mood received an immediate boost.

The blog I planned to write in my down time was still floating in my head as I departed for the Tour of Britain, which would finish my season out with Team Sunweb. The racing there was hard and punchy, just what I needed to sharpen up for the worlds road race. I was hoping for a result in the time trial, but in the end it was a day for the really powerful guys. I paced it the way I wanted to and set a 17-minute PR for the year, so I still finished the day encouraged for the much longer test at the world championships.

The Tour of Britain finished just as it started: dry. In total, we had about 30 minutes of wet conditions during the week, which makes me wonder if it truly counts as a Tour of Britain. As my teammate Roy Curvers put it, “I came to this race expecting to catch a cold, but I’m leaving with a suntan!”

While I was in Britain, my wife returned to Colorado before she was judged too pregnant to travel, so I returned to a quiet apartment. I was mentally tired from a full season, but the significance of the world championships carries with it a renewed motivation to focus just a little bit longer. The past week flew by with training rides and lots of sleep as I dialed up my focus to 11, and I’m feeling confident in my form and potential to have a great ride this week.

Now I find myself in Harrogate, less than 2 days before my first ITT World Championships, putting the finishing touches on my preparations. And I finally wrote a blog.