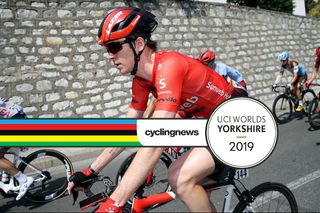 Chad Haga (Sunweb) will be one of four representing the USA at the 2019 World Championships road race, and will also ride the individual time trial (Image credit: Getty Images)

Without a true contender for the elite men's road race at this year's World Championships in Yorkshire, the Unites States squad will be hunting to get into breaks and hoping to fly under the radar.

The squad for the men's race was announced earlier in September, with Chad Haga (Team Sunweb), Alex Howes,  Lawson Craddock (both EF Education First) and Neilson Powless (Jumbo-Visma) deemed worthy of selection as part of a four-man unit.

Howes is the current national road champion and comes with the most experience on the Worlds stage, while Haga will race the road race and time trial with Craddock.

For Haga, this has been an already long season, but as he explained to Cyclingnews at the recent Tour of Britain, he still has enough gas in the tank for one last major event.

The primary goal for the 31-year-old will be the time trial. He won the final individual test at the Giro d'Italia this year thanks to an accomplished ride in Verona on stage 21. For the Worlds, he has set himself the target of breaking into the top 10.

"I'm really excited about it. It's been a goal for a long time to be selected for the Worlds, especially for the time trial. I've had a good year, so I'm happy to have been chosen," Haga told Cyclingnews.

A top-10 finish in the Yorkshire time trial comes with the added incentive of improving the US's chances of a second spot for the Tokyo Olympic Games in 2020.

"For the national team, we have the incentive of earning another start spot for Tokyo. A top 10 would help us do that, but I'd love to have a top 10 or better. With the perfect day, it could be possible."

When it comes to the road race, the US have no shortage of willingness and the likelihood is that Haga will be charged with patrolling early moves and then supporting Howes later in the race.

"We've not discussed it in great detail yet, but I'll either be hunting for the breakaway or just supporting our better finishers like Alex Howes. I've not seen the courses yet, though, and I need to do some research and recon.

"We don't have a standout leader, so it will be a pretty even distribution of opportunistic guys. We'll just race our bikes. We don't have a heavy favourite and we've only got a small team, so we have to use our energy wisely. For sure, I think it'll help that we go into the Worlds slightly under the radar. Everyone will be looking at Belgium, France and the Netherlands, in particular, and not us," he said.

On the trade-team front, Haga is about to lose his leader at Team Sunweb for the past few years in Tom Dumoulin, with the Dutchman switching to Jumbo-Visma over the winter.

The move leaves the team short of options when it comes to Grand Tour leaders, but Haga expects his role to remain roughly the same in 2020. He will continue to ride as a super domestique, but the departure of Dumoulin could offer the American a handful of individual chances in time trials. Any plans of that nature will need to be discussed in the off-season, of course, but Haga's grounded views and way of thinking will no doubt remain an asset to a team that is transitioning into something else since the news of Dumoulin's move was confirmed.

"We've not discussed it specifically. I might get the chance to focus on more time trials, but largely my role will not be changed. It just means that I'll be supporting a different rider," Haga told Cyclingnews.

"Tom's a great competitor. He missed the results this year, and the luck, but I enjoyed racing with him. It's sad to see him go.

"I think that I've pretty much found my role, though. It's just about improving in it, and moving later and later in races in terms of where and when I can support the other guys," he said.