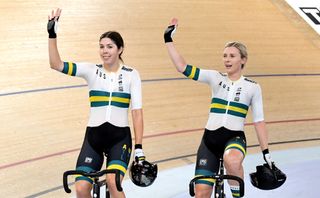 Georgia Baker and Annette Edmondson of Australia celebrate victory in the final of the Women's Madison 30km event during the 2019 Brisbane Track World Cup (Image credit: Getty Images)
JUMP TO:

Team Australia claimed another gold medal during day 2 of the UCI Track World Cup held at the Anna Meares Velodrome in Brisbane on Saturday. Georgia Baker and Annette Edmondson celebrated victory, their second gold medals of the weekend, in the final of the women's Madison.

Australia had already claimed two gold medals in the men's and women's Team Pursuits held during the opening day on Friday, where Baker and Edmondson were part of the winning women's team pursuit squad.

In the Madison, Baker and Edmondson secured 56 points to beat the French team of Clara Copponi and Marie le Net. The French pair earned 51 points and the silver medal, while the United States duo of Kendall Ryan and Christina Birch earned 32 points and the bronze.

"We're really lucky in the Australian Cycling Team because we have so much depth in our program so we can swap partners and still come away with really good results," said Baker.

In the men's racing, Aaron Gate (New Zealand) took home the gold medal in the four-round Omnium. He accumulated the highest number of points, 134, after placing second in the Scratch Race, first in the Tempo Race, 12th in the Elimination Race and sixth in the Points Race.

Germany's Roger Kluge secured the silver medal with a total of 116 points and Eiya Hashimoto (Japan) earned bronze with 113 points.

The UCI Track World Cup continues during the final day on Sunday with the men's Sprint and Madison, and the women's Keirin and Omnium.