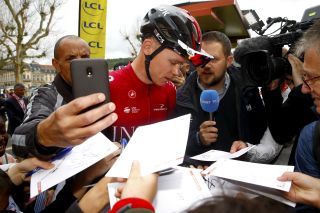 The second edition of the UAE Tour (February 23-29) kicks-off later this month with a world-class field set to compete over the seven-stage race. Top of the bill is Chris Froome (Team Ineos), with the four-time Tour de France winner returning to racing for the first time since his career-threatening crash at last year's Critérium du Dauphiné.

Froome's form will be under the spotlight like never before, especially given his time on the sidelines, and although his main ambition of a fifth Tour de France title is still months away, all eyes will be on his condition after such a lengthy absence. He will line up as part of a competitive Ineos squad that includes Rohan Dennis and the in-form Eddie Dunbar.

While last year's winner Primoz Roglic (Jumbo-Visma) will not be present – instead choosing to start his season at Paris-Nice – the UAE Tour is still littered with a number of high-profile GC contenders.

Last year's runner-up Alejandro Valverde (Movistar) will lead the line for his squad, while Adam Yates (Mitchelton-Scott) makes his 2020 debut. Wilco Kelderman (Sunweb) also ventures to the Middle East, fresh from his encouraging fifth place at the Tour de la Provence, Giulio Ciccone (Trek Segafredo) comes with his confidence on a high thanks to a win at the Trofeo Laigueglia, while Alexey Lutsenko (Astana) – the winner of the last two Tours of Oman – cannot be written off.

There's also Volta a la Comunitat Valenciana winner Tadej Pogačar, who will be backed by an understandably strong UAE Team Emirates squad, while Rafal Majka (Bora-Hansgrohe) and Wout Poels (Bahrain McLaren) are also both worth keeping tabs on.

The battle for the GC will take centre stage during various points in the week-long race, but the UAE Tour also provides a high-calibre sprint line-up with Pascal Ackerman, Arnaud Demare, Sam Bennett, Fernando Gaviria, Mark Cavendish, Caleb Ewan and Dylan Groenewegen all on the start list. There are four, potentially five, stages in which the fast-men could come out on top.

The calibre of sprinter also provides a number of fascinating subplots within the race. For Ackermann and Bennett, this will be the first time the two have clashed since the Irishman departed Bora-Hansgrohe for Deceuninck-QuickStep at the end of 2019. Both riders already have wins under their belts this season, with Bennett scoring victories in Australia and Ackermann victorious in Spain, but a morale-boosting win for either rider in the race will lay important foundations for the rest of the spring.

However, Ackerman and Bennett will have to ensure that they don't fixate on each other because Ewan (Lotto Soudal) has already proved that he means business after taking two wins at the Tour Down Under in January. UAE Team Emirates' Gaviria has also tasted victory this season, and with Max Richeze at his side, the Colombian will be looking to add to the stage win he took at the race last year.

Groenewegen, who also arrives at the race in fine fettle, does so with arguably the most complete lead-out, courtesy of his Jumbo-Visma squad. The first stage is perfect for the Dutchman’s explosive efforts over flat courses, as are the final two stages.

This year's race route has undergone a number of changes due to road works, but the course once again provides a number of different terrains on which to test competitors.

Unlike in 2019, there is no opening team time trial, with the organisers instead opting for a 148km jaunt from The Pointe to Dubai Silicon Oasis. There are two intermediate sprints en route before a technical finish that will almost certainly end in a bunch sprint.

The second stage from Hatta to Hatta Dam will provide the first uphill battle of the race. Ewan won here last year, proving that the sprinters should not be discounted, but the real GC contenders – such as Pogačar and Movistar's Alejandro Valverde – should also be in the mix for the stage win as they watch each other and ensure that they don't lose any precious seconds.

Stage 3 sees the first summit finish at Jebel Hafeet, and, with no time trial on the menu, this stage takes on even greater significance in the race for the overall. Valverde won on the 10.8km climb in 2019, and again back in 2018 when the ascent formed part of the Abu Dhabi Tour, but the Spaniard has not tasted victory since August of last year. In 2019, he opened his season account on Jebel Hafeet, and he will be hoping for a similar performance this time around.

Stage 4 from Zabeel Park to Dubai City Walk will provide the sprinters with their second change of victory. Bennett won at the same finish location in 2019, while any sprinter who missed out on stage 1 will be desperate to make amends.

The following stage sees the race return to Jebel Hafeet, for the second summit finish at the same location. Riders will battle the 6.8 per cent average gradient but the contenders from stage 3 are unlikely to be any different. Instead, the main difference will come from the time gaps already established in the race. Riders who lost time on stage 3 might be given room to attack, but even those chances are low given that the time gaps are likely to be low.

The final two stages, from Al Ruwais to Al Mirfa (158km) on stage 6 and Al Maryah Island to Abu Dhabi Breakwater (127km) for the seventh and final stage, are pan-flat and destined to end in bunch sprints before the overall victor is crowned.

Cyclingnews will have coverage from the UAE Tour, along with news, race reports, photos, podcasts and race highlights. The race is the second WorldTour stage race of the season, following on from the 2020 Tour Down Under.