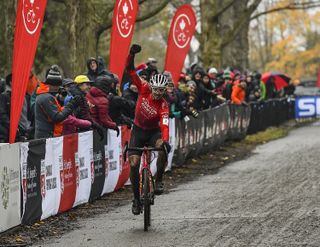 Peterborough hosted the national championships for the second consecutive year and, while riders avoided the overnight snow that last year turned the course into an icy run under very cold conditions, they were faced with intermittent rain and temperatures in the 4-6 degree Celsius range.

In the absence of last year's silver medallist, the multi-time champion Geoff Kabush, who was racing the Iceman Cometh instead, Van den Ham faced a stiff challenge from last year's bronze medallist, Marc-Andre Fortier (Pivot Cycles-OTE), who proved to be a much stronger contender this year.

The two rode away from the rest of the field on the first lap, but when van den Ham crashed on the third lap, it opened the way for Fortier to open a 15-second gap. Van den Ham didn't panic, however, and pulled Fortier back within a lap, before moving into the lead when Fortier crashed. Last year, Van den Ham beat Fortier by 1:49; this year it was only 24 seconds.  Alexandre Vialle (Toyota St-Eustache) took third.

"It's never easy when it's 'Jersey Season,'" said Van den Ham. "Everyone wants to win one.  Marc had nothing to lose today and he was out there gunning for me.  Marc and I were really throwing down the first couple of laps and then we sat up a bit.  He did a good attack up a climb, and I can say that he had me a bit on the rivet, and I just made a silly mistake, got caught in a rut and lost my front wheel.  Fortunately, we were close to the pits because I had bent my [brake] hoods in a bit. After that, it just became a time trial; I knew that I was riding big sections of the course stronger than him."