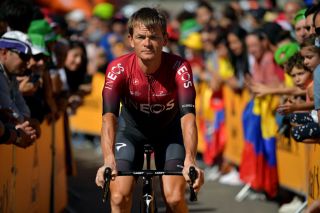 Vasil Kiryienka, the 38-year-old Belarusian who won the UCI Time Trial World Championship in 2015, has retired from professional cycling because of a recurring 'cardiac issue,' according to an announcement today from Team Ineos.

Kiryienka missed the beginning of last season after he was diagnosed with an unspecified 'cardiac anomaly' in March, but he returned to competition at the Tour of Normandie at the end of April and finished the season with 56 race days, including 18 stages of the Vuelta a España before he abandoned the Spanish Grand Tour.

In making today's announcement, Team Ineos said only that Kiryienka had announced his decision "following medical advice regarding a cardiac issue," but the team did not provide further details about Kiryienka's heart health.

A time trial victory at the European Games in June was the last of his 18 professional wins, but Kiryienka could be most identified as the figure on the front of the peloton for Team Sky – and later Team Ineos – hammering along for hours to keep the breakaway in check for his leader. The stoic rider took part in 20 Grand Tours, and was a member of the overall winner's team five times.

"It is disappointing for Kiry and for us as a team," said Team Ineos principal Dave Brailsford. "He is a true one-off and one of the greatest team riders of his generation. When a rider in a breakaway looked back and saw the open-shirted Kiry on the front of the peloton driving the chase, they knew their days were numbered.

"He had a unique hallmark style of maintaining a rock solid upper body whilst generating enormous power, hour after hour," Brailsford said. "The only thing that changed during his metronomic efforts was his grimace would grow as he dug to the very depths of his energy giving his all to the team, day after day."

Among Kiryienka's personal accomplishments stand a 2013 Vuelta a España stage victory and three Giro d'Italia stage wins, including a solo win to Sestriere in 2011. He also took overall victories at Route du Sud in 2011, Chrono des Nations in 2015 and 2016, and the GP Citta di Camaiore in 2008.

"It's a really sad day for me, but it's the right decision based on the advice I've been given by the medical team," Kiryienka said. "I've had a wonderful career and enjoyed every minute racing with this team. It's been an incredible journey, and I am so grateful for all the support I've received throughout my whole career."

Kiryienka spent seven seasons with Brailsford's British program, signing up in 2013 when the team was Sky Procycling. Before that he raced with Spanish teams Movistar and Caisse d'Epargne.