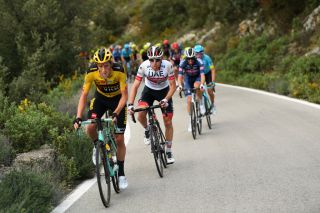 Australian climber Chris Harper took seventh place on the opening stage of the Vuelta a Andalucia – also known as the Ruta del Sol – on Wednesday, having been in the mix on the final climb with the likes of eventual stage winner Jakob Fuglsang (Astana) and Bahrain McLaren's Mikel Landa in what is his first year in the WorldTour with new team Jumbo-Visma.

Harper was delighted with his performance, but also a little disappointed that he wasn't able to follow the final race-winning move by Fuglsang and Landa.

"I felt really good, especially on the climbs," the 25-year-old said on his team's website after the 173.9km stage from Alhaurin de la Torre to Grazalema.

"I tried to accelerate a number of times, but I couldn't get away. Just before the summit of the final climb, I couldn't follow, after which I couldn't close the gap anymore on the descent. That's a bit of a pity because I think I could have gone a bit better.

"The team did a good job supporting Antwan [Tolhoek] and me until the final climb," he said. "It also gives me confidence, as I personally expected more from the Tour de la Provence last week. So it's good to see that things are going in the right direction again. The coming days are going to be tough, but I hope to maintain my position on the GC."

Harper has had a busy start to the season, taking part in last week's Tour de la Provence, where he finished 36th overall, on the back of racing the Australian National Championships and making his WorldTour debut for his new Dutch team at the Tour Down Under on home turf in January.

"We cannot be dissatisfied with two riders in the top 15," added Jumbo-Visma sports director Arthur van Dongen, referring to Harper's seventh place and Tolhoek taking 14th on the stage. "It was a very difficult stage with a lot of climbing. Chris showed himself well on the last climb, but got a bit surprised just before the top, so he just wasn't able to follow the first chasing group.

"Antwan also climbed along with the best for a long time. The other guys finished the stage without any problems and supported our two climbers very well all day. It was a fair stage, and everyone finished where they belonged to today. This result gives us good prospects for the remaining stages," he said.