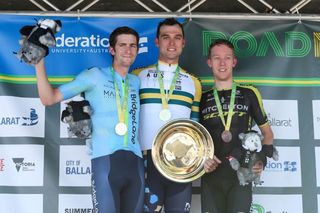 Australia's Chris Harper has signed a two-year contract with Jumbo-Visma, starting next season, with the 24-year-old joining the Dutch WorldTour team from Continental outfit Team BridgeLane.

Roglic wraps it up for Jumbo-Visma in Vuelta a España

Harper won the Oceania Championships road race in 2018, and went on to win a stage and the overall classification at this season's Tour of Japan in May, and two stages and the overall title at the Tour de Savoie Mont Blanc in June.

Harper had already been enjoying a strong season this year, starting with second place at the National Championships road race in January, and then riding aggressively at the Tour Down Under before taking fourth overall at the Herald Sun Tour in February.

He then took third place at the Oceania Championships road race in Railton, in Tasmania, ahead of his Tour of Japan victory, and then took fifth place overall at the Tour of Bihor-Bellotto in Romania.

His good form then continued into the Tour de Savoie Mont Blanc in France, but his Tour of Utah efforts in August were cut short by sickness, and he was a non-starter on stage 2.

However, that disappointment has been remedied by the chance to step up to WorldTour level, where Harper will ride alongside the likes of recent Vuelta a España winner Primož Roglič, Belgian star Wout van Aert, 2017 Giro d'Italia champion Tom Dumoulin and New Zealander George Bennett.

“I am very excited and grateful to have the opportunity to join Team Jumbo-Visma," Harper said on the team's website. "It is the perfect environment for me to continue and develop as a rider, as well as contribute to achieving the team's goals."

Jumbo-Visma sports director Merijn Zeeman added: "Chris has excelled on the Continental circuit. We think that he can show more of himself, and that is why we've give him a chance at WorldTour level."