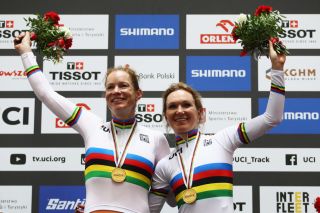 The reigning Madison world champions Kirsten Wild and Amy Pieters will not travel to Hong Kong for the third round of the UCI Track World Cup this month. The Dutch riders have opted to rest rather than join their national teammates in the embattled territory.

The Dutch federation said it was monitoring the situation in Hong Kong, which has been hit by months of escalating protests sparked by a bill allowing extradition of criminal suspects to China. Hong Kong began its 50-year transition from being a British colony to Chinese control in 1997, and the youth-led protest reflects fears that freedoms may be limited under China rule. The protests have grown increasingly violent in recent weeks, with thousands of protesters clashing with police at the Hong Kong Polytechnic University, about 15km from the velodrome, this week.

The KNWU issued a statement saying, "The developments in Hong Kong are being closely monitored, with close contact with the travel organization, the UCI and the Dutch government, should the unrest there escalate."

This year's World Cup is key for countries to qualify for the events at the 2020 Olympic Games in Tokyo and the Dutch lead in the rankings for the women's Madison, but national coach Adriaan Helmantel says it will be important for the men's Madison team to help qualify the maximum number of spots for the endurance team.

"Scoring points on the Madison remains of great importance for the Olympic Ranking," Helmantel said according to a KNWU press release. "We have made up a large gap but are still far from certain."

The Dutch sprinters have benefited from the strong performances of Harrie Lavreysen and look set for Tokyo, but the women's team and individual sprint points will be a focus for Hong Kong.