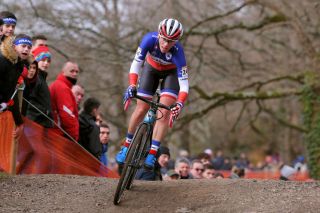 With 15 races already done and dusted from the 36-race USA Cycling 2019 Pro Cyclocross Calendar, American Kerry Werner and Frenchwoman Caroline Mani have slim leads over a host of rivals who have been swapping podium spots.

Werner leads Curtis White by 20 points in the elite men's standings, with newcomer to the top of the series standings Vincent Baestaens holding down third at 41 points back.

Young phenom Gage Hecht, 21, is currently in fourth position at 92 points back, and US champion Stephen Hyde has the fifth spot at 110 points in arrears.

The elite women's category features an even tighter battle, with Mani leading runner-up Maghalie Rochette of Canada by just four points, while third-placed Clara Honsinger, just 22, is 41 points back. Rebecca Fahringer is fourth, 91 points down, while Sunny Gilbert fifth at 136 points back.

The 2019 USAC Pro CX Calendar began at the end of August with Virginia's Blue Ridge GO Cross, where White and Werner swapped the top step of the podium over both days. Mani and Fahringer also started their back and forth, with each taking victories.

The series moved the following weekend to New York for Rochetser Cross, where Rochette took wins both days and White split the days with Baestaens.

The series moved to Iowa City next for Jingle Cross, including the opening round of the UCI Cyclo-cross World Cup. Lander Loockx won the opening C2 race for the men, while Jenn Jackson took the women's race.

The Jingle Cross World Cup race saw Rochette take the win, which she followed the next day with a win in the C1 race. For the men, Eli Iserbyt started his World Cup campaign with a win, while Gianni Vermeersch took the closing C1 win.

Fayette Cross in Arkansas – at the venue that will host the 2022 UCI Cyclo-cross World Championships – hosted the next two races for the US Pro CX. Werner and Rochette won the openers, while White and Honsinger followed up on the podium's top step the next day.

Last weekend's racing saw duel events in Colorado and Maryland, with the Charm City Cross taking place in the east and the Shimano-Floyds of Leadville US Open p/b Trek Boulder-Panaracer going off in Colorado.

Fahringer took out both days in Maryland, while White and Werner once again split victories over the two days. Out west, it was youngster Lance Haidet taking the first day, while legendary US champ Katie Compton grabbed a home-state win for the women. On day 2, Honsinger claimed the top spot for the women, and hometown hero Eric Brunner claimed the men's win.

The USA Cycling Pro Cyclocross Calendar continues this weekend with the DCCX on Saturday and Sunday in Washington, DC.