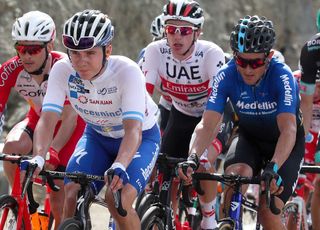 Twenty-three years and 69 seconds separate the two principal challengers for final overall victory at the 2020 Vuelta a San Juan.

Remco Evenepoel (Deceuninck-QuickStep), the golden boy of Belgian cycling, holds the leader’s jersey. Oscar Sevilla (Team Medellin), forever El Niño despite his 43 years, is the man most likely to take it off him.

Filippo Ganna (Italy) lies second overall, 33 seconds down on Evenepoel, but although he made the final podium in 2018, it is Sevilla, currently third at 1:09, who poses the far greater menace to Evenepoel ahead of the decisive summit finish at Alto Colorado on stage 5.

The Spaniard won the race overall in 2018, placed third a year ago and has been identified by Evenepoel as the man to watch.

"I think personally that Oscar Sevilla will be the biggest threat,” Evenepoel said after defending his lead at Villa San Agustin on Wednesday. “It's quite a big advantage and I hope I can keep my lead.”

Evenepoel build that commanding advantage thanks to his sparkling display in the time trial to Punta Negra on Tuesday evening but Sevilla underscored his own startling form with third place on the same stage, ahead of some notable time triallists.

Like Evenepoel, Sevilla was a faller in the crash 3.4km from the end of the opening stage but was handed a reprieve when the race jury awarded them the same time as the front group.

“After the crash, I’ve had problems with my right leg and I had my doubts, but I did my best,” Sevilla said afterwards. “I would have liked to have gone faster, but I’m happy.”

Sevilla turned professional in 1998 and had already placed 13th overall at the Giro d’Italia by the time Evenepoel was born two years later. The Spaniard’s career peaked in 2001 with his second place at the Vuelta a España – he lost the jersey to Angel Casero on the final day in Madrid – but he remained a high-profile figure in the European peloton until he was fired by T-Mobile in 2006 following his implication in Operacion Puerto.

Thus began the years of exile. Sevilla was first cast out of the ProTour, riding for Relax-GAM in 2007, and he then sought out opportunity in the Americas, landing first at Rock Racing and then at a succession of teams in Colombia.

In Sevilla’s first year living in South America, he returned a positive test for Hydroxyethyl-starch at the Vuelta a Colombia. He served a belated six-month suspension in the winter of 2011-12 and then won the Vuelta a Mexico immediately on his return. He has continued to amass a remarkable haul of Latin American stage races, including three triumphs each at the Vuelta a Colombia and the Clasico RCN, as well as victories in the national tours of Ecuador and Chile.

“If it wasn't for Operacion Puerto I'd probably still be in Europe, I'd have earned a lot more money, maybe more fame, but I'd never have been as happy as I am now,” Sevilla told Cyclingnews at the Vuelta a San Juan three years ago.

Sevilla lives in Bogota, with his wife and two daughters, usually rising at 5am to train. “The week before San Juan I did 33-35 hours of training, which I had not done before,” he told the EFE news agency this week.

Egan Bernal has been a regular training partner over the years. “I met him five or six years ago, he was a boy riding a mountain bike and I saw the condition he had,” Sevilla said. “I knew that he was going to be a great cyclist.”

When the Vuelta a San Juan resumes on Friday following its rest day, Sevilla will have the chance to measure himself against another precocious talent on the Alto Colorado. Twelve months ago, Evenpoel placed 24th on the Alto Colorado stage, losing just under a minute to Sevilla, who took fifth behind the victor Winner Anacona.

The circumstances were, of course, rather different. Evenepoel was in his very first race out of the junior ranks and was deployed to ride in support of Deceuninck-Quick-Step teammate Julian Alaphilippe on the ascent.

"I am a better rider than a year ago,” Evenpoel said. One senses he will be eager to prove it on Friday.

The Alto Colorado stage has been a staple of the Vuelta a San Juan and has proved pivotal in each of the three previous international editions of the race.

Bauke Mollema’s third place behind Rui Costa at the summit in 2017 was enough to seal his overall win. Gonzalo Najar’s thumping win a year later saw him seize the jersey, though he was later stripped of overall victory following a positive test for CERA, and Sevilla was awarded the title. Twelve months ago, Anacona’s victory on Alto Colorado was the foundation of his overall win.

Friday’s stage is 169.5km in length, bringing the peloton from San Martín to the 2565m summit of the Alto Colorado. Officially, the final ascent is 14.4km in length with an underwhelming average gradient of 4.4%, but in truth, the road climbs gradually for the final 50 miles or so, shortly after the route passes the second intermediate sprint at Talascasto.

That interminable road towards the finish brings the race from 959m above sea level to 2565m in three parts. First up is the category 2 Baños de Talacasto, which leads directly to another category 2 ascent, the 1752m-high Alto de la Cruceita. After the briefest of respites, the riders begin their final assault on the rarefied heights of the Alto Colorado, where the thinning air is a greater challenge, perhaps, than the modest slopes.

Another factor on the exposed road out of Talacasto is the wind, and so vigilance will be key, as Evenepoel pointed out on Wednesday evening.

“The thing is there’s always an echelon. There was last year and the year before as well,” he said. “It doesn’t feel like a climb, but actually you’re climbing for 80km, almost for three hours. The hardest part is at three kilometres to go.”

For Evenepoel, the ascent ought to be straightforward from a tactical standpoint. Sevilla is the obvious danger and he must keep the Spaniard in his sights, which may offer greater leeway to climbers with bigger deficits, such as Guillaume Martin (Cofidis). The Frenchman lies 2:28 down after the time trial, but he showcased his climbing form when the race passed through the Parque Provincial Ischigualasto.

Eduardo Sepulveda (Movistar) – 12th at 1:57 – will also expect to move up on general classification, while 2019 Giro di Sicilia winner Brandon McNulty (UAE Team Emirates) will aim to defend his place in the top five overall. Others looking to shine on the Alto Colorado include Nicolas Paredes (Medellin) and veteran José Rujano (Venezuela).

Topping the bill, however, are the niños young and old, Evenepoel and Sevilla.