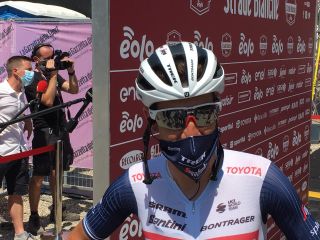 Two days after a crash brought a premature end to his return to competition at Strade Bianche, Vincenzo Nibali (Trek-Segafredo) was back in the saddle on Monday for the Gran Trittico Lombardo after it was confirmed that he had sustained no fractures in the fall.

Nibali injured his left hand in a crash with 70km remaining at Strade Bianche, and he abandoned the race shortly afterwards. After training for an hour and a half on Sunday morning, Nibali later had his injury assessed at Juventus football club’s J-Medical centre at the Allianz Stadium in Turin, where he was given the all-clear to compete at the Gran Trittico Lombardo.

“Unfortunately, they’re things that can happen in a race but in the end it all went well,” Nibali told reporters at the start of the Gran Trittico Lombardo in Legnano.

The Gran Trittico Lombardo is a new addition to the revised UCI calendar and, for this year only, it replaces the Tre Valli Varesine, Coppa Bernocchi and Coppa Agostoni on a schedule redrawn due to the COVID-19 pandemic.

The race combines elements of all three of the Trittico Lombardo’s constituent events and finishes on the same Varese circuit that traditionally features in the finale of the Tre Valli Varesine.

In 2015, Nibali came close to achieving a hat-trick in the events, losing out to Davide Rebellin in a sprint at the Coppa Agostoni, before winning the Coppa Bernocchi and Tre Valli Varesine. Nibali lines up on Monday in a Trek-Segafredo team that also includes Giulio Ciccone and Gianluca Brambilla.

“Today we’ll see how it goes. We can do a nice race, and we’ll see how my condition is during the race,” Nibali said. “I’m a bit unsure. Strade Bianche was a hard race, but today it’s a different kind of race and the route has changed too.”

The Sicilian is also scheduled to ride Milano-Torino and Milan-San Remo in the coming days before lining out at Gran Piemonte and Il Lombardia next week. The World Championships in Martigny and October’s rescheduled Giro d’Italia are Nibali’s primary targets on the rearranged calendar.

“It was on the seventh sector of dirt road. Vincenzo was just before the last uphill part and he took a hand off the bars to drink,” Slongo said. “He lost his balance on a bend and then somebody landed on top of him.”