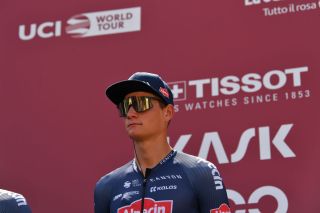 Professional cycling can be a cruel sport and Strade Bianche can be an especially cruel race: a badly timed puncture, a bad line through the deepest gravel or a missed bidon in the heat can end a race. After all the hype and expectation following months of training camps and preparation, the scorching Tuscan sun and the steep dirt climbs made a first real selection and race result.

Some riders, including Sagan, failed to even reach Siena and others rode over the finish line as Van Aert was about to celebrate on the podium. Only a quarter of the peloton finished the men's race, Edvald Boasson Hagen the last in 42nd place at 21:16. A total of 116 failed to finish, with eight riders cruelly classified as out of the time limit despite riding on to the finish.

Greg van Avermaet (CCC Team) made the key selection but then cracked under the attacks and finished 10th, even vomiting after such an intense effort.

"This was really one of the most difficult days of my career. I love this race, but maybe ask me later if I am happy that we can race again," he joked to hide his pain.  "I am happy with how everything went, but I even felt a bit sick on arrival. So I know that I went very deep.

"I was in the group of six riders in the final, but I mainly tried to follow as long as possible, because I felt I could not win."

Van der Poel finished 15th, at 10:06. He had been expected to reignite his cyclo-cross duels with Van Aert but a puncture before the key Monte Santa Maria dirt section put him on the back foot as the race exploded and his rivals accelerated. He did not stop in the finish area but was cheered by the small and appreciative crows of spectators as he rode to the team bus area.

"It wasn't all that hectic, but it was a very hot day. Everyone felt that," he explained.

"The flat tire was my big problem. It happened on the gravel before the Monte Santa Maria sector, the most important of the day. I had to go deep to get back there, along with Julian Alaphilippe and some other guys. I needed what I used there to go with the attacks shortly after but on Monte Santa Maria, I and the others had to ease up. Then it was over. I'm disappointed but at the moment I punctured, I still felt really good."

Nibali was not expected to shine but still wanted to return to racing at Strade Bianche. He punctured and crashed with 70km to go, hurting his left hand, which could cause some concern for the races ahead.

"Not the return to racing I'd hoped for," Nibali said. "But lets look ahead and see how I feel."

The 2018 Strade Bianche winner Tiesj Benoot (Sunweb) was another puncture victim and was left to chase in the clouds of dusts blown up by the race cars and failed to finish.

"Being on the gravel at the back was one of the craziest things I’ve seen and it was really difficult to get back to the front of the race – there was no way I was able to come back at that point," he explained.

"It’s a pity that we had bad luck as we all felt good going into the race and believed we could get a good result, but we are all even more motivated for next weekend at Milano-San Remo now.”

For some of the riders from the cooler climes of northern Europe, the intense summer heat of Italy was a shock and a problem.

"At the start I felt it was too hot for me,” Oliver Naesen (AG2R La Mondiale) admitted to Sporza. "I haven't got great memories of this race. It's nice, but I think it is nicer races here at 8 degrees rather than at 40."

The 38-year-old Philippe Gilbert (Lotto Soudal) finished 15 minutes down on Wout van Aert but was still in the top 25. He was disappointed to be hit by mechanical problems and suffered in the heat but his age, palmares and experience helped him accepted defeat philosophically.

"I finished together with Julian Alaphilippe, we saw a lot of other riders climb off," he pointed out.

"It was a tough race and very hot. My cycling computer indicated 40 degrees Celsius. And then I had a lot of equipment trouble, when that happens, you can't compete for victory."