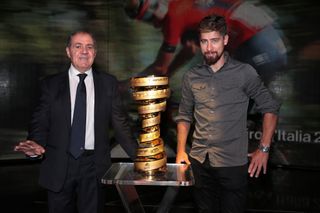 Giro d’Italia director Mauro Vegni has warned Italian Pro Continental teams that they must grow and improve if they are to continue to secure wildcard invitations to the race in the future.

On Thursday, RCS Sport announced that Androni Giocattoli-Sidermec, Bardiani-CSF-Faizanè and Vini Zabù-KTM had been awarded the wildcard invitations to the 2020 Giro, meaning that all three Italian Pro Continental squads will be on the start line in Budapest on May 9.

The Giro organisation initially had just two wildcard invitations at its disposal following the expansion of the WorldTour to 19 teams and the introduction of a UCI reform that grants automatic qualification to the top-ranked Pro Continental team from the previous season.

Total Direct Énergie’s decision not to take up their berth opened up an additional wildcard spot, however, and there was little surprise when RCS Sport awarded all three places to Italian teams.

“The Giro has always looked to support the Italian movement and I’m trying to put at their disposal what little remains after the new reform. There aren’t many margins left for us organisers,” Vegni told La Gazzetta dello Sport.

At the previous two Giri, RCS Sport awarded one of its wildcards to Israel Cycling Academy, meaning that the now defunct Nippo-Vini Fantini missed out on the race in 2018, while Neri Sottoli-Selle Italia (now Vini Zabù-KTM) was absent in 2019. Now part of the WorldTour following a merger with Katusha, Israel Start-Up Nation earned automatic qualification for the 2020 Giro.

When the Giro’s Budapest start was first announced, there were reports that a purported Hungarian outfit, the E-powers Factory Team, would be awarded a wildcard, but the project collapsed in November. Gazprom-Rusvelo, who took part in the race in 2016 and 2017, were considered the most realistic non-Italian contender, but the three Italian squads always looked most likely to earn selection.

Up until 2019, the top-ranked team in the season-long Ciclismo Cup classification earned an automatic Giro wildcard as part of RCS Sport’s commitment to supporting Italian teams. That route to the Giro was removed following the implementation of the UCI reforms for 2020, but RCS Sport ultimately assigned its places to Androni Giocattoli-Sidermec, Bardiani-CSF-Faizanè and Vini Zabù-KTM.

“My objective was to support our teams, but I’ll say clearly that in the future, it won’t be enough to be an Italian team to ride the Giro,” Vegni said. “Ours has been an important effort, given the interests of the business and always increasing internationalisation. I’d like teams to look at how other squads are growing abroad and think about structuring themselves more, about projects and planning. It’s no longer sufficient to be Italian to get invited to foreign races either.”

The 2020 Giro d'Italia gets underway with a time trial in Budapest on May 9 and concludes in Milan on May 31.