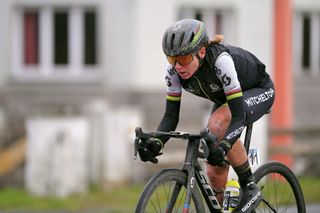 Road race world champion Annemiek van Vleuten (Mitchelton-Scott) says that she's now feeling "aimless" and is "plan-less" after returning to her home country of the Netherlands earlier this week, having left a training camp in Spain just ahead of the coronavirus lockdown there.

Van Vleuten told Dutch newspaper the Algemeen Dagblad that she's been left lacking motivation following professional cycling's shutdown of racing for at least the coming month, but that she's holding on to the hope that the Olympic Games should still happen – postponed or otherwise.

"The pressure's off for this week and next week," she said in a video call with AD.nl on Wednesday. "I'll still be riding, but won't be following any tight schedule. After that, we'll try to come up with a nice plan, but, until then, I'm a bit aimless and plan-less.

"It's nice to think that the Olympic Games will happen, and to have that as a goal, but I also have to remember that they could be postponed. They are not going to cancel the Olympics – that's a certainty," she said, echoing sports fans' hopes.

Van Vleuten had been able to get out of her hotel on Mount Teide, in Tenerife, where she'd been on a training camp, just ahead of Spain's lockdown earlier this week.

She told the newspaper that it felt strange to have to leave the perceived safety and quietude of Tenerife for an aeroplane full of other passengers and head back to the Netherlands.

"I had my head in my hands for a while," admitted Van Vleuten, who won her one and only race so far in 2020, before the sport went into shutdown: the Omloop Het Nieuwsblad on February 29. "The goal now is to try to hold some sort of shape. I just don't really know yet what I'm holding that shape for."