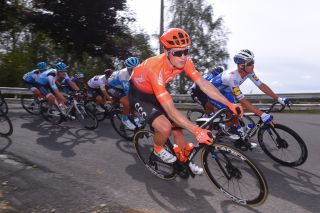 Nathan Van Hooydonck will ride for Jumbo-Visma from next season after signing a two-year contract with the Dutch squad. The Belgian is the latest rider to confirm his departure from CCC Team, who are still looking for a replacement sponsor to ensure their continued existence in 2021.

“I’m happy to get this opportunity from Team Jumbo-Visma,” Van Hooydonck said in a statement released by his new team on Friday. “This really feels like a new chapter in my career. I am really looking forward to my first moments with this team.”

The 24-year-old turned professional with BMC Racing in in May 2017 and remained with Jim Ochowicz’s squad when it merged with CCC ahead of the 2019 season. Van Hooydonck was part of Greg Van Avermaet's supporting cast in the cobbled Classics in recent years and he will now look to develop further on the cobbles alongside Wout van Aert and Mike Teunissen.

“The Classics period is a very important period for me. I hope to develop myself in the Classics,” Van Hooydonck said. “I also want to continue to make progress in the time trial discipline. The past few years have shown that Team Jumbo-Visma is developing well on all fronts. Then it’s nice to be part of such a team. For me, this is the team to take further steps as a cyclist.”

Jumbo-Visma directeur sportif Merijn Zeeman welcomed the arrival of Van Hooydonck and said that the Belgian would buttress the team for the Classics.

“We were looking for a strong rider who could strengthen our team around Wout and Mike in the Classics,” Zeeman said. “Nathan, with his talents, is the right rider for that. In addition, his time trial capabilities come in handy in team time trials or in a sprint train. We look forward to seeing him next season.”

Following the confirmation of CCC's withdrawal from the sport, Jim Ochowicz’s Continuum Sports holding company are still searching for a replacement sponsor for 2021 and the team has confirmed that all of its current riders are free “to explore other options” for next season.

Team leader Greg Van Avermaet has already confirmed his move to AG2R La Mondiale in 2021 along with Michael Schär, while Patrick Bevin is set to ride for Israel Start-Up Nation. On Thursday, Deceuninck-QuickStep announced that they have signed Fausto Masnada from CCC Team with immediate effect, and the Italian is expected to line out for his new team at October’s Giro d’Italia.