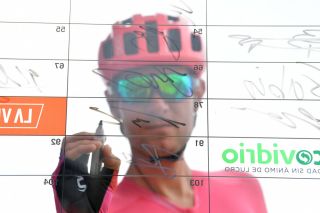 Van Garderen's inaugural season for EF last year was a mixed bag. After a start at the UAE Tour in February, he was fourth in the individual time trial at Paris-Nice, wore the yellow jersey at the Tour of California for four days and was second overall at Criterium du Dauphine, but crashes cut short his Grand Tour attempts at both the Tour de France and Vuelta a Espana.

Van  Garderen's South American start for 2020 will mark a departure from his most recent seasons, when he's kicked things off in the Middle East or Spain. The 2020 Tour Colombia 2.1 will take place in the Boyacá region around Bogotá, with altitudes not dipping below below 2,500 metres for the week, so he'll be getting serious block of altitude training right from the go.

Van Garderen eases into the groove at Dauphine

The 2020 Tour Colombia 2.1 begins Tuesday, February 11, with a 16.7km individual time trial, followed by a steady diet of moderately hilly road races before the finale on Sunday, February 16, when the race concludes with the climb of Alto del Verjón.

Other  teams expected for the race include Movistar, Israel Start-Up Nation, Rally Pro Cycling and Bardiani-CSF-Faizanè, among others.