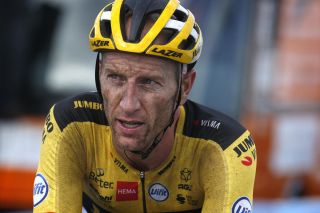 Before learning that his team leader Steven Kruijswijk had tested positive for COVID-19 and his Jumbo-Visma team would have to leave the Giro d'Italia, Jos van Emden spoke to the Cycling Podcast and pointed the finger at Giro organisers RCS Sport and the UCI for the positive of Mitchelton-Scott's Simon Yates.

In a foreshadowing of the multiple cases that emerged on the rest day COVID-19 tests, Van Emden said he had no doubts about where Yates picked up the virus and criticized RCS Sport for failing to secure the 'bubble' around the riders.

Unlike at the Tour de France where riders were sequestered away from the public and kept apart from race staff and other support crews, Van Emden said the Giro d'Italia's bubble was burst at the Grande Partenza in Sicily.

"It already went wrong in the first hotel we were in. We were there with four or maybe five teams - that's not a problem because ... they take care of the health of the team - but the police and the motos were there, the Shimano neutral service, and normal people were there all eating from the same buffet.

Simon Yates out of Giro d'Italia after testing positive for coronavirus

"That was a big mistake. I heard someone from QuickStep - they had the same - also Mitchelton-Scott was in that hotel and now Simon Yates is infected.

"For me there's no doubt where he got the virus. It must have been there. That's just wrong. Already that's 10 teams in two hotels, with other guests - that's not good."

Before he knew the results of the COVID-19 rest day testing, Van Emden hoped the contagion would be limited to Yates but suggested it would spread from there and pointed directly at the UCI for not stopping RCS Sport from packing teams into hotels with people outside the race bubble.

"The UCI should regulate this. If they want to be the head of cycling then they should say this is not good that there are so many teams in one hotel," Van Emden said. "They only take care of themselves - as long as they don't get infected - that's how I see it.

"We should be protected by the people who run the sport. We do all the things for them but they never do anything for us. This is again a chance for them to show they like us, they don't always want to fight us.

"If there are more guys infected I hope the UCI gets the bill. To be short, they should have told RCS this is not a good idea, there should be another solution for this."

After Yates, four of the Mitchelton-Scott staff came up positive and the team left the race although RCS Sport said they would not enforce a two-positives and you're out rule as was in place for the Tour de France.

When Kruijswijk tested positive, Jumbo-Visma saw what happened with the Australian team and opted to also leave, with team director Addy Engels saying, "In our opinion, this is the most responsible decision with one positive case in the team, being Stevie. We’ve all been close to him and, looking at what happened with Mitchelton, with one case and now another four, we’ve decided to take the most responsible decision as we look to the health of our riders and staff."

Sunweb sprinter Michael Matthews was forced to leave after coming up with the virus, although he was asymptomatic. His team decided to continue in the Giro, as did Ineos Grenadiers and AG2R La Mondiale who each had one staff member contract the virus.