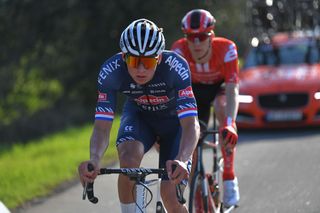 Mathieu van der Poel (Alpecin-Fenix) has said that he will continue to ride multiple disciplines until the 2024 Olympics in Paris. The Dutchman told WielerFlits that he wants to keep racing road, cyclo-cross and mountain bike until then.

Van der Poel is the current cyclo-cross world champion, having defended his title earlier this year in Dübendorf, Switzerland. He also holds the European cross-country mountain bike title and was targeting the cross-country race at the 2020 Tokyo Olympics before the event was postponed until 2021 due to the COVID-19 coronavirus pandemic.

Last season, Van der Poel rode his fullest road campaign yet, winning Amstel Gold Race, Dwars door Vlaandern and Brabantse Pijl in the spring before winning the Tour of Britain later in the year. The 25-year-old was due to make his Paris-Roubaix debut this year before switching focus to the mountain bike in the summer.

Van der Poel's Alpecin-Fenix team manager: We want to do as many races as possible

"I want to continue to combine the three disciplines," Van der Poel told WielerFlits. "As it looks now, I'll stay on the mountain bike until Paris. That also gives me an extra three years to try to become world champion in that discipline. I really love mountain biking."

Van der Poel and his Alpecin-Fenix team had hoped for a Vuelta a España invite this season, a race which would've been his Grand Tour debut before race director Javier Guillén ended their hopes late last year.

The team lobbied for a place at the rescheduled Tour de France, too, but it looks like the Dutchman will have to wait until 2021 to make his debut at a three-week race.

"Normally, the focus would have moved very quickly to the Grand Tours, to try to ride a Grand Tour for two to three years," Van der Poel said. "Then I can switch back to mountain biking and ride some more World Cups in between which can be combined with a Grand Tour. That way I can stay at the top of the ranking.

"The uniqueness of what I do, combining mountain biking, road cycling and cyclo-cross – I want to try to keep that up for as long as possible."

Van der Poel has yet to announce his full schedule for the revised UCI calendar, though his goals are likely to remain along the same track as before, aiming at the spring Classics. The Tour of Flanders and Paris-Roubaix, which now fall a week apart at the end of October rather than their usual April dates.