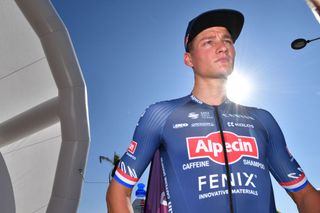 Two lines at the bottom of the UCI's most recent press release appeared to raise the chances of seeing Mathieu van der Poel at the 2020 Tour de France but, contrary to reports in Belgium and the Netherlands, Cyclingnews understands that neither his Alpecin-Fenix team nor any other team will be awarded an extra wildcard place for this year's Grande Boucle.

The Tour de France, if it goes ahead on the rescheduled dates of August 29-September 20, will be contested by the 22 teams of eight riders already sure of a place, with no room to add extra teams. Cyclingnews understands that some one-day Classics may reduce team sizes from seven to six riders and so help smaller ProTeams, but that will not happen at the Grand Tours.

Van Der Poel and Alpecin-Fenix have been lobbying for an extra place for several weeks, with race organiser ASO apparently keen to add them to the peloton. Their hopes grew after the UCI announced it would make an announcement regarding 'team participation rules' and 'rules concerning the number of riders per team at the start of races' on May 5, when it publishes revised men's and women's WorldTour calendars.

According to several reports, the UCI was ready to reduce team sizes for Grand Tours from eight to seven riders, giving race organisers the chance to award extra wild card places to complete the peloton. That would have allowed ASO to award three extra wild card places and so see give Mathieu van der Poel a chance to make his Tour de France debut.

However, two trusted sources have told Cyclingnews that team sizes for the three Grand Tours will remain at eight riders, with no extra wild cards awarded to ProTeams, thus ending Van der Poel's of riding the sport’s biggest race in 2020 after the Tokyo Olympics were postponed and the Mountain Bike World Championships were cancelled.

Last year, 22 teams of eight riders took part in the Tour de France for a total of 176 riders. If the number of riders per team were reduced from eight to seven, the peloton would be reduced to 147, freeing up places for 21 riders or three extra teams. However, the leading WorldTour would no doubt be against reducing team sizes to seven riders because it could reduce their visibility in the race and weaken the chances of the teams fighting for overall success.

All 19 men’s WorldTour teams receive automatic invitations to all WorldTour races, including the three Grand Tours. Total-Direct Energie earned selection for the 2020 Tour de France as the top-ranked UCI ProTeam from the 2019 season, while ASO awarded its discretionary invitations to Arkéa-Samsic and Vital Concept-B&B Hotels.

Alpecin-Felix has a 27-rider roster and team manager Philippe Roodhooft confirmed his interest in riding the Tour de France but admitted that he had no confirmation of a place.

With no Grand Tour on their agenda, Alpecin-Felix and Van der Poel will have to focus on the one-day Classics and other stage races where they have already been invited.