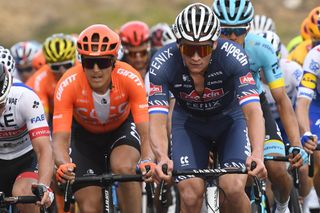 The Belgian and Dutch media are currently reporting that Alpecin-Fenix star Mathieu van der Poel may yet have a chance of riding the Tour de France this year if the UCI reduces the number of riders taking part for each team from eight to seven. But while Cyclingnews understands that team sizes will not be reduced for the Grand Tours, Van der Poel's team manager, Philip Roodhooft, says that the team is simply hoping to take part in as many races as they can when, and if, competition resumes.

"We, like all other teams, want to race as many races as possible from the moment the new cycling calendar becomes official," Roodhooft told HLN.be on Thursday. "The question is, of course, whether that calendar can be implemented effectively. But it is clear that we are definitely interested in taking part in the Tour de France, and we've also informed [race organiser] ASO of that."

Twenty-five-year-old Dutchman Van der Poel had originally planned on targeting the mountain-bike cross-country race at this summer's Tokyo Olympic Games, and then potentially aim at riding his first Tour de France in 2021. But the Games' cancellation until next summer means that the three-time cyclo-cross world champion would now dearly love to make his Tour debut in 2020 – if there was a way for him to take part.

"We actually informed all organisers that we are interested in participating [in their races], and that included ASO," said Roodhooft, with the sport's ProTeams – which were known as Pro Continental teams before this season – as keen as WorldTour teams to get starts in any races that do take place this year. "We thought it was necessary and useful to do that, but we've just left it there for the time being. It's not up to us to invite or speak for ourselves."

The UCI was set to publish the dates for a revised 2020 calendar on Wednesday, but that announcement has been pushed back to May 5. In addition, the governing body said that it would also announce 'team participation rules' and 'rules concerning the number of riders per team at the start of races' next week, with reduced team sizes potentially allowing more ProTeams to take part in the major races.

However, sources told Cyclingnews on Thursday that while smaller squads may be considered for one-day races, the sizes of teams for the Grand Tours will remain at eight riders. While it is hoped that the postponed 2020 Tour can still be held this year – with provisional dates of August 29-September 20 – Van der Poel's Alpecin-Fenix team did not receive one of the three non-WorldTour berths for this year's race.

A sentimental case for inclusion

The sentimental case for Van der Poel's inclusion is that his maternal grandfather is Raymond Poulidor, who passed away last November, and who is indelibly linked to the Tour due to being known affectionately as 'The Eternal Second' – thanks to him finishing second three times, and third five times, but never wearing the maillot jaune – and for working at the Tour each year since 2001 as an ambassador for yellow-jersey sponsor Crédit Lyonnais.
Regarding his hopes that there may still be some way for Van der Poel and his Alpecin-Fenix team to participate in the Tour, Roodhooft explained: "It's not that we have any other information – either officially or unofficially. The only thing we are aware of is the UCI communiqué that was sent out yesterday [Wednesday]. It states that the conditions to participate and the number of participants per team will be communicated on May 5.

"But if there's room, and we're asked to participate, we would of course say yes to it., That's logical," he said.