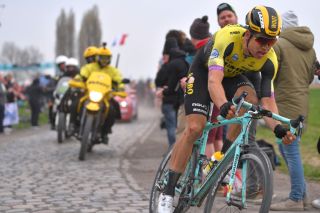 Wout van Aert (Jumbo-Visma) chases back from his crash at the 2019 Paris-Roubaix (Image credit: Getty Images)

Wout van Aert has taken to the cobbles of Paris-Roubaix in a training ride this week with a number of his Jumbo-Visma teammates, suggesting that his recovery from his horror crash at the Tour de France in July is continuing to head in the right direction.

Van Aert crashed out of the Tour during the stage 13 individual time trial in Pau after clipping a crowd barrier, which resulted in a serious thigh injury, requiring surgery and two months off his bike.

The 25-year-old has been riding again since September, gradually ramping up his training in the hope of racing some cyclo-cross events during the discipline's 2019/20 season, which he'll use for training for the 2020 road season, when he hopes to have recovered sufficiently to again be competitive at the spring Classics.

Van Aert finished 22nd at the 2019 Paris-Roubaix, only fading in the last 25km due to a hunger knock, later admitting that he had forgotten to eat or drink enough after having had to chase back to the front group following both a puncture and a crash earlier in the race.

Van Aert scouted out a number of the race's cobbled sections on Wednesday alongside Mike Teunissen, Norwegian road race champion Amund Grøndahl Jansen and Maarten Wynants, which included the famous cobbles of the Carrefour de l'Arbre in order to test out some of the Dutch WorldTour team's bikes and equipment ahead of the 2020 spring Classics, according to HLN.be.

Earlier this week, Van Aert won a work-tribunal court case against the manager of former team Verandas Willems-Crelan, Nick Nuyens, who was seeking €1,110,000 in damages after Van Aert terminated his contract with the Belgian squad ahead of the 2019 season, stating that he'd only found out about the team's 2019 merger with Dutch outfit Roompot-Nederlandse Loterij "five minutes before the official communiqué was sent out".