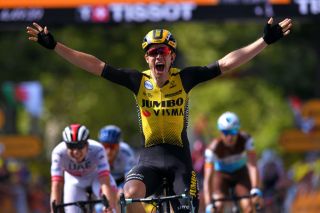 Wout van Aert has won his work tribunal case, avoiding the risk of having to pay €1.1 million in damages to his former Verandas Willems-Crelan manager Nick Nuyens. A judge in Mechelen, Belgium issued a verdict on Tuesday, ruling in favour of the former cyclo-cross world champion and recent Tour de France stage winner.

Nuyens had sought €1,150,000 (£991,719) after Van Aert unilaterally terminated his contract in September 2018 while the squad was negotiating its merger with Dutch team Roompot-Nederlandse Loterij.

Van Aert had already agreed to ride for Jumbo-Visma in 2020 at the end of his contract with Nuyens but after terminating his contract he joined the Dutch WorldTour team in 2019 as the legal case was heard.

Van Aert claimed he had the right to terminate the contract after accusations that Nuyens had tried to convince Aert's former coach Niels Albert to sign an incriminating statement about him. Albert refused and became a key witness in the case.

Van Aert and his legal team argued this gave them the "urgent reason" to end the contract due to a lack of trust. Nuyens' lawyer argued it was part of a ploy for Van Aert to end his contract but the judge ruled in the rider's favour.

Nuyens was ordered to cover the legal costs of the case but he can appeal the verdict.

Van Aert is currently recovering from the serious leg injury he suffered during the Pau time trial stage of the Tour de France. He touched the roadside barriers, which caught his hip, dug deep into his muscle and violently pulled him off his time trial bike. He was taken to nearby hospital in Pau, where he underwent surgery to repair the torn skin, capsule and muscle of his upper thigh and hip. A week later he went under the knife a second time in Belgium and was allowed to leave hospital at the end of July.

Doctors recommended two months of medical recovery before Van Aert began any kind of rehabilitation. He has recently begun to ride outdoors in the hope of riding some cyclo-cross races and returning to road racing in 2020.

Van Aert was not in court on Tuesday but was quickly contacted by his lawyer.

"He can now find mental peace and fully concentrate on his sport," Walter van Steenbrugge said, according to Sporza.

“Cycling is not just a sport, there must be trust between employer and employee. That was no longer the case here."