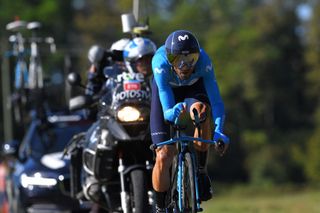 Quintana to fight on despite Vuelta a España time trial defeat

Reigning world champion Alejandro Valverde (Movistar) shows no sign of leaving the Vuelta a Espana's general classification field of battle after a solid time trial that allowed the Spanish veteran to move up from fourth to second overall.

Movistar had reportedly hoped that Valverde would lose around a minute to leading favourite Primoz Roglič (Jumbo-Visma) in the Pau TT.

Whilst Valverde's 13th place, at 1:38, was somewhat off that mark, it still enabled the Spaniard to move into second place overall and places him at 1:52 down on the Slovenian in the general classification.

But given Valverde is now 1:15 and two GC spots ahead of former Vuelta leader Nairo Quintana, the question of Movistar's leadership was quick to surface in the media's questions to the man from Murcia and Valverde provided a courteous but somewhat barbed response.

"Nairo, the team and me are all getting a bit tired of these constant questions about who's the leader and who isn't," Valverde told reporters. "One minute up or one minute down still doesn't mean anything. We're both going to do the best possible for Movistar and that's an end to it all."

Valverde was pleased he had turned in a good, if not brilliant, time trial, and said he had not been surprised that Roglič had put in such an exceptional ride.

"It was always clear that Roglič was the top favourite, and he showed that today," Valverde said. "Personally, I felt I was going well, but it was a long TT and a very demanding one, so that's why I was feeling empty in the last part. Losing the time I did is what you could expect."

Valverde also said that his current time losses on Roglič were more or less what could have been predicted and that the team had conceived themselves to be in this situation ever since the race had begun in Alicante.

What he, and perhaps nobody in the Vuelta had anticipated, was that another Slovenian, Tadej Pogačar, would put pressure on the top four in the GC from the other side of the rankings.

Valverde had nothing but praise for Pogačar, 19 years his junior, saying "he'd be far higher up overall if it hadn't been for that crash on the first day. And he's shown in the mountains he's strong, too."

But Valverde's main focus, unsurprisingly, remains on what Movistar can achieve in this year's Vuelta, the last in which Valverde will ride together with Quintana, as they have done virtually every September since 2012. And just as in 2012, he is still up there with a chance of winning.

"We'll see how things pan out," Valverde said. "But at least I've come through the TT unscathed."