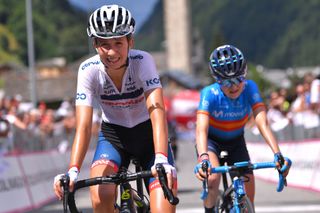 Cecilie Uttrup Ludwig started the 2020 season with great expectations. Having signed for a new team, FDJ Nouvelle-Aquitaine Futuroscope, ahead of the new year, she hoped to improve even further on her 2019 results. The 24-year-old was supposed to race in her new colours for the first time at the Omloop Het Nieuwsblad but had to cancel her participation at short notice due to illness – and now, there are no cycling races for the foreseeable future.

However, Uttrup Ludwig is adamant not to get downbeat over the loss of a spring campaign she was looking forward to. When outdoors movement became severely restricted in Spain, she chose to travel back to Denmark.

“I’m living in Girona and have been there the last couple of weeks,” she recently told Cyclingnews. “But now you can’t go outside anymore except to the supermarket or the pharmacy, so I quickly decided to go home to Denmark. I arrived in Copenhagen Monday morning.

“In Spain, I had been looking at a minimum of two weeks’ indoors quarantine. At the moment, it is still possible to train outdoors in Denmark, though nobody knows how long that will last. Riding outside is what I like best, so it made sense to come home. And it is nice to be around my family. I’ll be seeing more of my parents and my little brother than I normally would.”

At the same time, Uttrup Ludwig is cautious and limits her social contacts, forgoing visits to her grandparents or meetups with friends and not training with other cyclists.

“I am riding outside, but I’m doing it on my own," she said. "And I do not have a problem with that. It is just great to be able to get some fresh air.”

With the cycling season currently in suspended animation, the excitable Dane tries to keep her spirits up, looking forward to the resumption of the calendar, whenever that may be.

“I was training hard during the winter, I was looking forward to racing for my new team, and I had expectations to do better than last year. And then everything is cancelled" she said. "It is a strange situation right now, we do not know when we will be able to race again, and of course that is sad.

"But I trust the authorities to have made the right decisions. I still have a job, I know I can go out and train on my bike, and that makes me happy. And if this should be restricted in Denmark too, I can still ride on a turbo trainer at home. It helps put things into perspective – in the end, it’s just a bike race; other things are more important than that.”

Uttrup Ludwig has arrived well at her new team and built a rapport with her French and international teammates, who also include two fellow Scandinavians in Stine Borgli from Norway and Emilia Fahlin from Sweden.

“What I like about the team is that it started as a small French squad almost exclusively with French riders and has grown all the time, especially in the last couple of years. They applied for Women’s WorldTour status, and the sponsor FDJ has made a long-term commitment – we have a lot of ambition and want to show ourselves.”

With seven French riders on the squad balanced by seven non-French riders, the team is international in its internal communications as well.

“The team language is English," Uttrup Ludwig said. "That includes tactics meeting, race radio, team meals, everything. We are encouraged to learn French and use it if we want to, but it isn’t a hard requirement. Of course, the French riders and staff speak French among themselves sometimes, that is normal. But I am not too shy to call them on that – or we Scandinavians just start speaking Danish, Swedish, and Norwegian together, and it’s the French that don’t understand anything,” laughed Uttrup Ludwig.