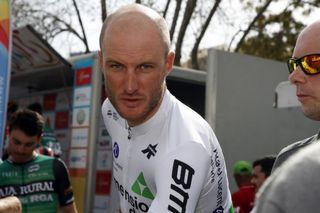 Dimension Data's Steve Cummings crashed with around 50 kilometres to go of stage 5 of the Tour of Britain on Wednesday, with his team since releasing a medical update, in which it said that the British rider had "suffered a fracture" as a result of the crash.

Philippa York analysis: Cummings shows he still has what it takes at Tour of Britain

He was taken by ambulance to hospital, where he stayed overnight, but exactly what he's fractured is yet to be made public. The team said that "an update on his condition will be supplied in due course".

Cummings, from the Wirral, was the local favourite on the stage that started and finished in Birkenhead, and enjoyed plenty of encouragement from fans throughout the day along the 174km route.

"It was really cool to see everyone today," he said on Dimension Data's website. "I knew every road, and the support the team and I received was fantastic.

Regarding his injuries, Cummings added: "To everyone that's sent in messages of support, I'd just like to say a big thanks, and the message from me is that I'm fine."

Only the day before his crash, Cummings had spoken to Cyclingnews about his desire to continue in the sport for another season, with his contract with Dimension Data running out at the end of this year.

"I haven't spoken to the team yet, and they haven't approached me," he told Cyclingnews. "I'm not worried because I've always done my best, and am just looking forward. I feel like I haven't performed to my maximum for a while, and feel I'm coming back now.

"If it is my last year, then I'm also happy with that," he said. "It could be my last time at this race – it could be for all the next races – but that's OK."

Depending on the severity of his injuries, his crash could now jeopardise his ability to race again this season.

🇬🇧 #OVOToBICYMI: @StevoCummings spent the night in hospital after sustaining a fracture in yesterday's crash. Wishing Steve a very speedy recovery which I'm sure will be helped by good run of results by his beloved @LFC! Details: https://t.co/HWgdJ0efVb pic.twitter.com/ViTJovINepSeptember 12, 2019