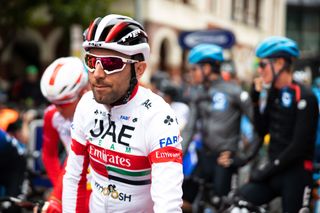 UAE Team Emirates puncheur Diego Ulissi has spent much of March stuck in quarantine after the UAE Tour, following the Covid-19 coronavirus outbreak at the race in late February.

The Italian only returned to his home in Lugano, Switzerland on Sunday, meeting his recently born daughter for the first time. On Tuesday, he spoke to Il Tirreno, the newspaper from his home town in Tuscany, with the interview published by Tuttobiciweb. Ulissi talked about his time in quarantine, the emotion of finally going home, and the lockdown measures affecting his home country.

"It was touching," Ulissi said on his return home. "Morale was very low during the last few days in Abu Dhabi. I knew what was happening in Italy from the media, with that damn virus that is raging here in Switzerland too.

"To see Arianna, Lia and especially embrace little Anna, who was born at the beginning of March, was one of the most beautiful moments of my life, a scene of unforgettable tenderness."

Ulissi finished ninth overall at the UAE Tour after taking fourth place at Hatta Dam and sixth and 11th place finishes on the two stages up Jebel Hafeet. The race was a continuation to a strong start to 2020 for the 30-year-old, after his second overall at the Tour Down Under.

Now, of course, his road racing future is uncertain. Ulissi's March was already ruined by the quarantine before the race cancellations started rolling in. He spoke of how he and his teammates were stopped and tested by medical staff after stage 5 of the UAE Tour, a process that began the long isolation period.

"We returned to the hotels and were immediately blocked by the medical staff, who quarantined us from the UAE Team Emirates and some athletes from other teams. At the same time, we were swabbed for the first time," he said.

"Unfortunately, Fernando Gaviria and Maxmiliano Richeze were positive for the virus, and so that day our forced isolation began, which for me was 16 very long, and in some ways distressing, days. During that period there were three more tests, fortunately, all negative, and so they eventually gave us the go-ahead to go home."

Ulissi's first major targets for 2020 are now under threat. Even if the postponement of the Ardennes Classics has yet to be confirmed, it looks almost certain. Meanwhile, May's Giro d'Italia has already been postponed.

The frustration over not being able to race, and not knowing when they'll compete again, will inevitably run high in the pro peloton as season goals fall by the wayside.

For Ulissi's part, he said that the cancellations are necessary, given the travel involved in the sport.

"The stop was sacrosanct, inevitable," he said. "It will be used to face this terrible pandemic. We cyclists during the competitive year travel all over the world and stay in all kinds of hotels. We come into contact with a lot of people along the routes and at the arrivals, as well as our staff and close colleagues.

"As a result, the risk of spreading the virus would be too great. I believe that we will also have to accept the possibility that the 2020 cycling season, after the many postponements of more or less important races, will be permanently cancelled if it's useful for our health.

"Personally, I'm training regularly, here in Switzerland there are no cycling restrictions for the time being."

In his home country of Italy, however, restrictions on movement mean that riders have to carry a self-certification letter in order to train outdoors but still face abuse from uninformed car drivers and checks by police. Meanwhile in Spain, people are only allowed outside for essential work, to buy food, for medical needs, or to care for the vulnerable.

Ulissi denounced those attempting to break the Italian restrictions after being told about events on Sunday, which saw some Tuscans stopped by police as they headed for trips to the coast.

"I think we're dealing with foolish criminals who are hurting themselves and others," he said. "We must follow government orders. Staying indoors and not going out at the moment seems to be the only effective way to stem the spread of the coronavirus.

"If you really can't stay still – and I turn here to fellow cyclists of all ages – do as I do. I did 14 days of turbo training in my hotel room in Abu Dhabi. Don't play with fire and risk your lives and the lives of others. That's my advice."