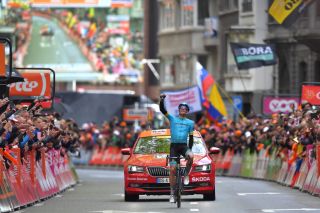 Organiser Christian Prudhomme has acknowledged that it will be ‘complicated’ for Flèche Wallonne and Liège-Bastogne-Liège to take place in late April due to the coronavirus pandemic.

The spread of cornavirus Covid-19 in Europe has already led to the postponement of many races, including the Giro d’Italia, Milan-San Remo, Tirreno-Adriatico, Gent-Wevelgem and the E3 BinckBank Classic, and it is expected that the Tour of Flanders will be formally postponed in the coming days.

Ardennes Classics and Tour de France organiser ASO pushed for Paris-Nice to go ahead last week, despite the withdrawal of seven WorldTour teams beforehand and increasingly tight restrictions on public gatherings in France. Two more teams left the race before it eventually finished a day ahead of schedule on Saturday.

After the race, Prudhomme conceded that the next race in ASO’s portfolio, Paris-Roubaix (April 12) was likely to be postponed due to the Covid-19 pandemic, and he later added that the organisation’s Belgian races, Flèche Wallonne and Liège-Bastogne-Liège (April 22 and 26) risked the same fate.

“It’s very difficult to project. The situation is changing from one hour to the next. I can only report what I hear,” Prudhomme said, according to RTBF. “They say we’ll need at least six weeks, so if that’s the case, it will be very complicated to organise the Belgian Classics.”

France closed most public spaces and non-essential businesses this weekend in response to the Covid-19 pandemic. Although Prudhomme stopped short of confirming the postponement of Paris-Roubaix, he admitted that it was difficult to envisage the race taking place.

“My word is not official, but it is hard to see how Roubaix could be different from the rest of the races,” he said.