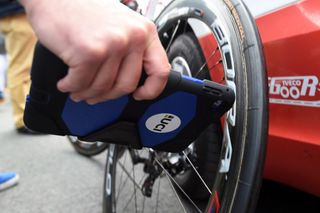 The UCI uses its magnetic resonance tablet to check for motors at the Tour de France (Image credit: Bettini Photo)

The UCI has insisted it remains fully committed to stamping out mechanical doping, despite its decision to drop Jean-Christophe Péraud, who led the governing body's efforts against hidden motors.

On Tuesday, French newspaper L'Equipe reported the news of Péraud's dismissal on June 30, with the UCI later providing confirmation via a statement claiming "the fight against technological fraud remains unchanged".

Péraud, who finished second at the 2014 Tour de France, was appointed 'Equipment and Fight against Technological Fraud Manager' in late 2017, following David Lappartient's election as president. The UCI confirmed it let him go due to cuts relating to the financial consequences of the COVID-19 pandemic.

"Confronted in recent months with a reduction in its income due to the current health crisis (coronavirus pandemic), the UCI has been forced to reorganise some of its activities as part of its programme. In this context, it ended its collaboration with Jean-Christophe Péraud," read a statement from the UCI to Cyclingnews.

French inquiry into mechanical doping dropped for lack of evidence

"The former Cross-country Olympic vice-champion and second in the 2014 Tour de France helped to solidify our programme for fighting against mechanical cheating, notably through the development of the trackers project, in cooperation with CEA Tech. We salute the expertise and commitment of Jean-Christophe Péraud over these two and a half years, thank him for his contribution to the credibility of our sport, and wish him every success in his future responsibilities."

Péraud helped introduce a number of new methods to detect and deter mechanical doping during his two-and-a-half-year tenure. Along with the magnetic tablet scanners already in use, 2018 saw the widespread use of X-ray scanning, along with thermal imaging and bike tagging, while the use of magnometer tracking devices has been trialled ahead of a planned roll-out this year.

Péraud's departure came at the same time as a long-running French investigation into hidden motors was closed due to a lack of evidence. However, the UCI insists nothing has changed in terms of the fight against mechanical doping.

"The UCI team that worked alongside Jean-Christophe Péraud, our technical commissaires, our service providers and our National Federations remain in place and will all continue tests and controls (using a range of technologies) in upcoming races in particular once the UCI WorldTour season restarts in August," the statement read.

"The UCI’s commitment to, and investment in, the fight against technological fraud remains unchanged. The UCI will continue to seek to innovate, develop and invest to combat new and future technologies which compromise our sport’s integrity."